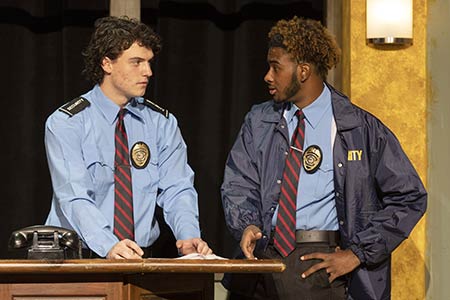 This fall’s 1212 play is Kenneth Lonergan’s Lobby Hero, a dialogue-rich play set entirely in the lobby of a Manhattan apartment building. Directed by Performing Arts Department faculty member Darlene Anastas, the show features four main characters whose lives intertwine during the investigation of a crime.

“Lonergan is a Tony-award winning playwright who is known for his dialogue and how he integrates ideas and action into his dialogue,” Anastas said. “It’s a very naturally flowing play. It’s fitting to set it in the lobby of a residential building in Manhattan, where people from all walks of life are passing by. It deals with interpersonal interactions, some social issues with policing, and the personal issues of the ‘lobby hero’ whose life is on display for the whole show.”

It is the first 1212 play for Anastas, who has taught at Milton since 1981—she has always worked on the larger, main-stage productions. “It was exciting to me to work in depth with just a few students and to explore the issues the play has, which are very relevant today.”

To capture the feeling of New York City at night, Anastas added music from a student who will play a street saxophonist; since the show is set entirely in the lobby, the set is somewhat minimal. Although the play doesn’t run until after Thanksgiving, students were already planning to work without their scripts in mid-October.

“So much of the dialogue is motivated by reactions from other characters, so they have a lot to memorize,” Anastas said.