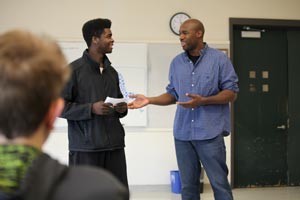 Beginning with a single suggested word from the audience, “ravioli,”, the 3Peat improv troupe rolled out a series of hilarious scenes for students at King Theatre. Five members of 3Peat, an acclaimed part of Chicago’s vibrant improv comedy scene, came to Milton as a Melissa Gold Visiting Artist. They performed for students, held a master class in the basics of improv, and visited several classes, including improvisation and public speaking. Students had several opportunities to perform with the professionals.

“The students were way ahead of what I was expecting,” 3Peat member Torian Miller said. “They didn’t hesitate to get up and participate. As a group, we don’t judge one another. It’s a space where you can feel safe to be silly and just have fun.”

The 10-member team, which plays every Monday at Chicago’s legendary iO Theater, formed in 2012. The performers, who are all black, were friends and improv teachers involved in Chicago comedy, but felt pressured to compete with one another for a limited number of parts in theater and television. They decided to work together.

“We love one another, and we all know each other’s skills. It’s a very supportive environment on stage,” Nnamdi Ngwe said. Speaking to students after the performance in King, Mr. Ngwe encouraged future performers to “keep being great and stay humble,” saying that maintaining a reputation as a team player will help in any tight-knit arts community.

When they teach improvisation, the performers said, the worst thing for a newcomer to expect is to be “the funny one” on stage. Instead, they should come prepared to listen and to build upon what the other performers do. “You also have to listen to your audience, because you don’t know what they’re going to be like when you start,” said Lisa Beasley. “We have a responsibility to train them to understand what they’re going to see.”