A Tricycle Rides Back to Milton 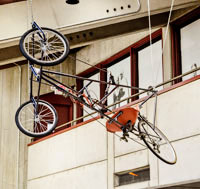 A new art installation hanging from the rafters in the Art and Media Center completes a circle that began with two inquisitive students in the late 1970s. David Rabkin ’79 and Justin Aborn ’79 were in their junior year when they built a large, recumbent tricycle called the “A-Rab.”

“Both of us were fiddlers,” says David, who is now the Farinon director for current science and technology at the Museum of Science in Boston. “We liked building, and we were always taking stuff apart and putting it back together again. The idea of the trike came about because we really wanted to learn how to weld. Welding is one of the great crafts, being able to work with metal and bond it in a way to make it really strong.”

They approached Michael Bentinck-Smith, who was the woodworking teacher in the Lower School at the time. He agreed to teach them to weld, but to count the work as an independent project, they needed a solid idea and design.

“Something that went fast with wheels made sense to our adolescent minds,” says David. “We decided that a human-powered vehicle would be much more elegant, so the design grew from that idea. Back then, you could go to the dump and find building materials. So much of the trike came from the old Milton dump!”

After 1,000 man-hours during the winter, the trike was ready to ride that spring. Ian Torney ‘82, chair of the visual arts department, says he remembers David and Jason riding the trike around campus. After they graduated, the trike sat in David’s mother’s garage until 1997, when they extensively refurbished it for an arts festival. This time it was stored more carefully, so when they took it out of the garage in 2013 to hang in the AMC, it was in much better shape.

“Seeing the trike hanging in the AMC is very satisfying,” says David. “It does my own and Justin’s heart good to know that it’s somewhere other people will enjoy it. It’s an interesting form. From where it is hung, you get to look at from all angles; it looks different from various directions, and you can appreciate a whole other dimension of it. Milton students are so bright and motivated, so if even a little inspiration is derived from looking at it, and that leads somewhere interesting, that is great. If it opens a door and shakes up someone’s mental model of something they were thinking about, then we’ve achieved our mission.”