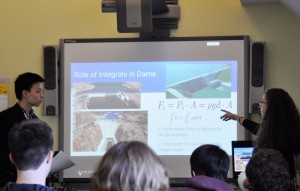 Accelerated Calculus students are presenting their projects to peers this week. The projects range from using integrals to explore how liquids flow in tubes, to examining the load, shear and moment diagrams involved with building cantilever beams.

“We chose to focus on dams because they’re something people might see every day, but don’t really know how they work,” said Alex during the presentation.

Jen Zhao’s (III) and Derek Cui’s (III) project provided an introduction to finding the center of mass using calculus. Using the SketchUp 3D modeling software, they printed a 3D model of an irregular shape. They then determined the shape’s center of mass, which was marked so the student audience could try balancing the item on a finger.