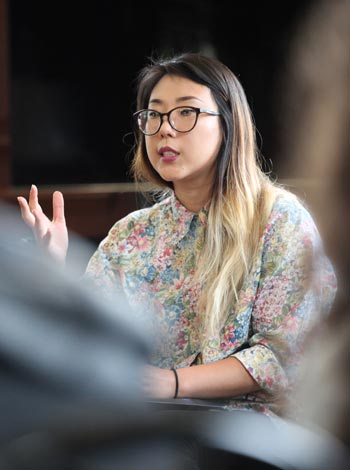 Exploring the intersections of race, gender, sexuality and immigration, poet and activist Franny Choi read several of her poems at an assembly sponsored by the Asian Society and GASP student groups.

Ms. Choi, the author of Floating, Brilliant, Gone, shared work about life as the queer daughter of Korean immigrants. Ms. Choi recalled coming out to her parents, a process that took years, as they adjusted to her identity.

In her poem “Choi Jeong Min,” Ms. Choi recalls being in first grade and asking her mother if she could only go by her American name, Frances, and the process through which she grew to accept her Korean name later in life. She wrote the poem in response to a white poet who used a Chinese pseudonym in order to be published in the Best American Poetry anthology.

“My father ran through all of his possible rechristenings: Ian, Isaac and Ivan, and we laughed at each one, knowing his accent would always give him away,” she read. “You can hear the pride in my mother’s voice when she answers the phone, ‘Hello, this is Grace,’ and it is some kind of strange grace she spun herself.”

Ms. Choi also read her poem “For Peter Liang,” a scathing indictment of the Chinese-American New York Police Department officer who shot Akai Gurley, an unarmed black man, during a routine patrol. Following Mr. Liang’s conviction, Ms. Choi explains, many Chinese activists attempted to paint Officer Liang as a second victim of the shooting, as he was criminally prosecuted and convicted, while white police officers involved in similar incidents had not been charged. In the poem, Ms. Choi explains: “I will only keep demanding that the white versions of you get what you got.”

“Call in the crowds, tell them to come home, tell them to take down their signs. Tell them that we have work to do,” she read. “Tell them, if there is a second victim here, it is not you, it is what was lost between two communities in pain, but unlike the first victim, this one can be brought back.”

Communities of color must support one another, says Ms. Choi, who argues that division among different racial groups is often used as a tool of oppression. “Our liberation is all tied up in the same thing. If one of us is not free, then none of us is free.”

Before introducing Ms. Choi, Kelly Lo (III) read a poem she wrote: “Too Asian to be Gay.” Ms. Choi praised Kelly’s work, saying, “It feels very special and affirming to come to a high school and hear a student talk about these intersections so beautifully.”

Ms. Choi has received awards from the Poetry Foundation and the Kentucky Women Writers’ Conference for her work, which has been published in Poetry Magazine, The Poetry Review, Indiana Review, Margins, New England Review, and others. Her work has been featured by the Huffington Post, PBS NewsHour, Feministing, and Angry Asian Man. She was a 2016 Rhode Island State Council on the Arts Fellow and former Co-Director of the Providence Poetry Slam, one of the most highly-regarded spoken word poetry communities in the nation.  As a Project VOICE teaching artist, she has taught students of all ages and experience levels.