“All in this Together,” Student Performers Prepare for High School Musical 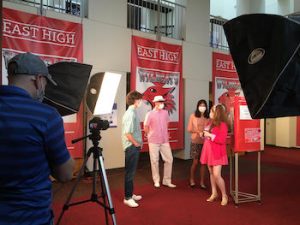 Throughout this spring, parts of the Milton Academy campus have transformed into the fictional East High School as performing arts faculty and students filmed scenes for the spring show, High School Musical Jr.

Opening virtually on Thursday, May 20, the show chronicles the interpersonal comedy and drama behind the scenes of, well, a high school musical. The “junior” show is adapted from the 2006 Disney Channel movie of the same name, which launched the careers of actors Zac Efron, Vanessa Hudgens, and Ashley Tisdale, among others.

“Shooting this musical like a movie has been such a fun and interesting experience,” said Ingrid Krishnan ’22, who plays Gabriella, a shy transfer student who sparks a connection with star basketball player Troy, played by Ben Simpson ’21. “Before this, I did not have any experience doing film acting, so it has been exciting to work with the cameras.”

Preparing for the show has been a window into filmmaking, with actors needing to be 100 percent ready for their scenes on the day of shooting, particularly as many scenes have been filmed out of order based on the availability of locations. Some students, who are participating remotely, are being creatively edited into the show, said faculty member Peter Parisi, who is co-directing the show with Eleza Kort. “We committed to making this as equitable an experience as possible for students, and we even have one cast member who’s overseas.”

In order to remain consistent with COVID-19 health and safety standards, student actors are wearing masks in the show. Shooting the show on film, however, has also allowed the actors to focus on up-close details and show emotions that might not be detectable for a live audience during a stage performance.

“Acting with masks on has certainly been challenging,” Krishnan said. “Since basically only our eyes are visible to the camera, we have to work to convey meaning. I feel that this challenge has lessened as we’ve gone on in the production.”

John Kulow ’22, who plays Ryan in the show, was excited when he learned Milton was taking on High School Musical because he grew up watching the movie and his middle school had previously performed it. Krishnan and Kulow said they hope the Disney movie’s popularity and nostalgia will encourage students to watch the show.

“I’ve always thought of it as such an upbeat show, which was exactly the type of show that I wanted to be involved in after a year of COVID lockdowns,” Kulow said. “We’re performing it as a movie. At first, I was a bit pessimistic about that plan, but the production quality from the lighting to the costumes to the choreo has been so incredible.”

Most of the teachers in the Performing Arts Department have been involved with High School Musical. In addition to Parisi and Kort directing, department chair Kelli Edwards choreographed the show, and teachers Shane Fuller, Dar Anastas, and Evan DelGaudio have worked as the film crew. Fuller is editing the project, and an external music director is mixing the actors’ vocal tracks, which students recorded on their own.

“This is the first time, at least in my memory, that almost the whole department has been working on the same production,” Parisi said. “It’s been really nice for the adults to have this collaborative moment.”

High School Musical has an alumni connection as well. Zach Dodes ’94 reached out when he learned Milton was performing the show, because he is currently working as a producer on the Disney+ spinoff, High School Musical: The Musical – The Series. Parisi said he is working on a way to connect Dodes with the student performers.

Dates and times for streaming performances are:

Reserve your free tickets at www.www.milton.edu/play.