All The World’s A Stage—Literally—For Fall Plays 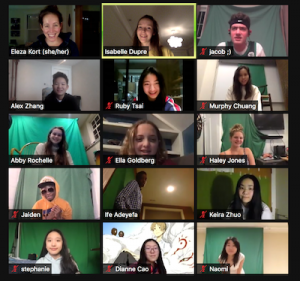 Milton’s performing arts faculty and students found creative solutions to bridge distances and time zones to offer a full slate of performances this fall, including the plays Macbeth, The Illustrated Bradbury, and this weekend’s Class IV play, All I Really Need to Know I Learned in Kindergarten.

Performing Arts Department faculty member Eleza Kort, who directed the Class IV play, said about one-third of the 15 cast members are international students, so meetings and rehearsals were scheduled to accommodate different time zones. Each student received a green screen and filmed themselves performing in front of it. Faculty member Shane Fuller edited the scenes together to look as if the actors were in the same place. The show opens Thursday, October 29. Details about accessing the performances are below.

“The students have been amazing, and I’m really proud of them. Performing remotely is challenging—this is the world we’re living in right now,” Kort said. “We really wanted this to be the best experience it could be for our incoming freshmen. They deserve that and we wanted them to feel special, and to meet each other. A lot of them were thankful for the shared experience.”

All the fall performances are recorded, instead of live. This approach, while a challenge to coordinate, provided many learning opportunities for faculty and students as they adapted to creating engaging shows during the COVID-19 pandemic.

All I Really Need to Know I Learned in Kindergarten is a series of vignettes based on the bestselling book by Robert Fulghum. The show features funny and serious stories about the themes we learn as little kids.

“We learn these values in kindergarten like sharing, and being kind, and they kind of go by the wayside as we become adults,” Kort said. “There are stories about childhood and about older people, so it’s a whole range. It’s a really sweet play.”

People can watch All I Really Need to Know I Learned in Kindergarten beginning Thursday, October 29 through Saturday, October 31. Links to each performance are available on the Performing Arts Department’s Eventbrite page. Once registered for an event, viewers will receive a link and a password to access their selected performance. Links are open on the day of production for 24 hours from 8 a.m. to 8 a.m. Eastern Time the following day. Additionally, students will have access to a live watch party through their CampusGroups accounts, which will be held on Friday, October 30 at 8:30 p.m. Eastern Time. This is an opportunity for students to watch and support the performers together.

The Illustrated Bradbury, a series of 10 stories by the author Ray Bradbury, runs online from November 12 through November 14. The play is narrated by Bradbury’s famous character “The Illustrated Man” and features the author’s signature blend of fantasy and science fiction. Director Darlene Anastas went above and beyond to include student cast members from around the world, waking up at 4 a.m. to direct a student filming in Saudi Arabia as well as doing her own filming on campus, said Performing Arts Department Chair Kelli Edwards.

Fuller, as a theater designer and filmmaker, has been an invaluable resource to help translate theater productions to film, Edwards said.

“Our goal this year was to create a situation where anyone who wanted to participate could, no matter where they were, both in performing and in tech,” Edwards said. “It means that everything we’re doing, at least for the fall, is filmed. We’re using a lot of different platforms depending on what the shows need. It’s been really complicated, but we’re doing it.”

Tickets for The Illustrated Bradbury will be available on the Eventbrite page during its run from November 12 through November 14.