An auspicious launch for Dare: The Campaign for Milton 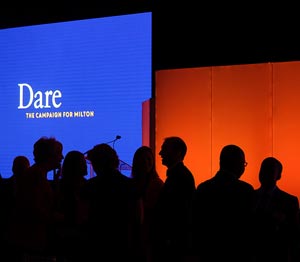 Dare: The Campaign for Milton is about Milton’s people—our students, our faculty, and the power of their experiences together. This campaign—the most ambitious fundraising effort in Milton’s history—will raise $175 million to ensure that Milton Academy is a national leader in teaching and learning: connecting the most talented, motivated students in the world with the most innovative and dedicated faculty. At the public launch of Dare, the School is already 48 percent of the way toward that goal.

On October 24, more than 500 alumni, parents, friends, faculty and staff celebrated the campaign launch on campus—under a tent on the quad, hearing personal stories about the life-changing effect of a Milton education. Lisa Baker of the English department—parent to three students in Milton’s Middle and Lower Schools—shared the story of Helson Taveras ’14 (now a sophomore at Columbia University) and Israel Moorer ’16, who connected to launch an app allowing Columbia students to donate extra meals from their weekly meal plan to students who cannot afford to eat. “Israel and Helson’s story is inspirational, not in small part because it exposes the truth that these two students would never have met had they not received financial aid to attend Milton,” said Lisa. “But it inspires, too, because it illustrates the profound connection between storytelling and change.”

Co-head monitor Mack Makishima ’16 spoke to the moments when Milton forced him to ask the question Who am I?, and then offered him the resources and opportunities to find out: “At a school like Milton, the options conform to you rather than your conforming to options,” he said. Karla Alvarado ’15, now a student at Harvard University, individually thanked the many faculty members who guided and supported her—in the classroom and in Hallowell House—from a nervous, questioning 14-year-old away from home, to the confident, composed young woman she is today. Closing the storytelling portion of the program, President of the Board Lisa Donohue ’83 conveyed how Milton prepared her to lead—from her Class IV Talk to her role as CEO—and how the responsibility is now on everyone invested in Milton to lead at this key moment, to secure Milton’s excellence in the years ahead.

Brad Bloom, chair of Milton’s campaign committee—former board president and parent of two Milton graduates—spoke personally as a father, grateful to this School for inspiring in his children a love of learning and the skills and confidence for them to set, and meet, their own high expectations. Brad introduced Head of School Todd Bland who announced the Dare campaign total, reported our percentage already toward that fundraising goal, and thanked the many generous, visionary donors in the room who helped prepare Milton for this moment in our School’s history.

Visit the Dare campaign website today. Learn about the opportunities ahead, and about the critical goals that this campaign will enable Milton to achieve. A photo gallery from the launch event is available on the campaign site, as well.

Watch video of the launch event