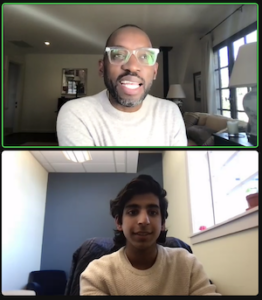 As a young man, Dr. Philip McAdoo had a moment where he thought his ambitions weren’t enough. While waiting to be interviewed to receive a scholarship from the Coca-Cola Scholars Foundation, he met young people planning to be doctors, lawyers, and civic leaders competing for the same scholarship. McAdoo wanted to be a theater actor.

“I carried that with me for the rest of my life,” said McAdoo, Milton’s 2022 MLK Day speaker. “I thought I needed to be something more than I was. Dr. King created space for everyday people to do the extraordinary.”

McAdoo delivered a webinar titled “Reflections on Service and Love” to Upper and Middle School students on Tuesday afternoon, and to the broader Milton community in the evening. Zain Sheikh ’24 moderated Q&A sessions with him following his talks. Desman Ward ’23, Nate Dixon ’22, and Zahra Tshai ’22 introduced McAdoo for the sessions.

An educator, activist, and former Broadway actor, McAdoo became one of the original Coca-Cola Scholars after those interviews in Atlanta. He went on to perform in The Lion King and Rent, and is today the vice president of diversity, equity, and inclusion for the environmental advocacy group Earthjustice. He is the author of Every Child Deserves and Independent Queers: LGBTW Educators in Independent Schools Speak Out.

McAdoo visited campus in the fall, where he met with leaders of affinity clubs and the Department of Equity, Inclusion, and Justice. He said the students’ passion for community engagement and inclusion was inspiring. Even as young people, they have the power to make meaningful change through activism and service, he said.

Start locally, McAdoo encouraged. He stressed that in the backdrop of virulent national division over topics like the pandemic response, inequality, and arguments over how to teach America’s history of racism, students may understandably feel overwhelmed. But they can begin by making meaningful change where they are right now, including at Milton.

“Think about the spaces and places where we can be great,” he told students. He challenged them to think about the ways in which students group together on campus and to consider any areas where there might be divides. Every member of the community deserves to feel like they belong, McAdoo said.