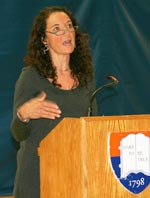 Poet and creative writing teacher Sally Bliumis-Dunn ’77 returned to Milton on November 4 as one of the year’s Bingham Visiting Writers, a series that brings notable authors to campus to read their work, meet with students, and teach creative writing workshops. Sally read to students in Classes I and II from her recently published collection of poetry titled Talking Underwater.

Lisa Baker from the English department introduced Sally, saying her “poems collect the very ordinary images around us… and, then, without agenda or lofty scope, acknowledge the significance found there, as if significance just quietly, even tenderly entered—perhaps as a few yellow leaves ‘caught suddenly in an updraft’ might appear before a window. Amidst such appearances, we remember to see more than we do, to stay still longer, and to note beauty and its counterpart pain—not when they blind us but rather when they steal upon us ‘like an atmosphere changing.’”

Sally earned her bachelor’s degree at the University of California, Berkeley, and received her master of fine arts degree from Sarah Lawrence. Her poetry has appeared in a number of publications, includingPrairie Schooner and The Paris Review. In 2006, the manuscript of Talking Underwater was a finalist for the University of Arkansas Press’s First Book Prize and for Ashland Press’s Richard Snyder Poetry Prize; it was also a semifinalist for the Kenyon First Book contest.