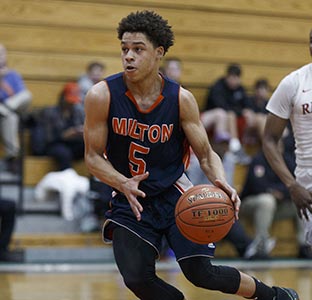 The boys’ varsity basketball team finished their impressive regular season (19-5) with a 65-50 win over rivals Noble and Greenough in front of packed bleachers in the ACC last Friday night. Seeded 5th in the NEPSAC Class A quarterfinals, the team traveled to Suffield Academy in Connecticut yesterday to pull off an exciting 62-54 win. The boys now advanced to the semifinals where they will play Phillips Exeter at 2:30 p.m. on Saturday at Exeter.

This year’s team had a deep bench and according to team co-captain Dan Schlakman (I), “Whether it was 10 points or 2 points or a pass or an assist, everyone contributed. No one cared about their personal stats, which was refreshing. We knew we could be a good team, and we went out excited to win every game.”

Rhett Carter (I), the other co-captain, agrees. “Between us, it’s not competitive. We support each other and want the best for each other.” Rhett will play at Claremont McKenna College next year and Dan will play at Amherst College.

Head coach Lamar Reddicks says he’s seen many “unselfish” Milton teams, “but this is one of the most unselfish teams I’ve coached. No one cares about their playing time; they are just in it for the good of team.”