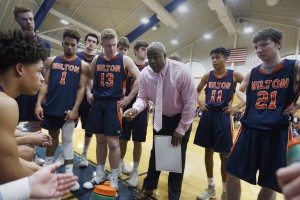 Milton Boys’ Varsity Basketball shined in its NEPSAC playoff run, advancing all the way to the championship game where they ultimately fell in a nail biter to Choate Rosemary Hall. The Mustangs battled ferociously in all three of their postseason games. Coach Lamar Reddicks said, “we had great contributions from all our guys.”

In their first playoff contest against Phillips Exeter, Milton was able to pull away late, winning by a score of 76-62. Although the game was close at times, Milton kept their composure and always maintained the lead. Cormac Ryan (I) lead the charge for Milton on his senior night. He scored double digits along with playing stellar defense. In the closing minutes of the game, Dan Schlakman (II) rattled the rim with a monstrous slam. The crowd erupted after the play and the Stangs never looked back.

Milton carried much of this momentum into the semi-final game, defeating Belmont Hill by a score of 75-49. The game was never particularly close. The Mustang defense, lead by Thomas Urquhart (I), recovered many steals throughout the game. On the offensive side of the ball, Rhett Carter (II) and Cam Shockley (I) led the charge.

In the highly anticipated championship game, Milton lost to Choate by a score of 59-56. In the first half, Ryan sizzled, scoring a whopping 20 points. He was virtually unstoppable in the half. Whether it was a deep three or driving layup, all of his shots seemed to be falling. Milton bigs played a huge role in stopping Choate’s penetration to the basket. However, as the game progressed into the final minutes of the second half, momentum began to swing. Choate guards caught fire from beyond the arc, eventually catapulting them to the lead. After a misplay on Milton’s part, Choate was able to capture a 3-point victory.

From the exuberant fans to the remarkable competition, the NEPSAC playoff was a fantastic way to close out the winter season. Coach Reddicks was thrilled with his team’s participation, saying, “I couldn’t be any prouder of this group of guys. They battled each and every day and every play. I’ve been lucky with the group of guys I’ve been able to coach!”