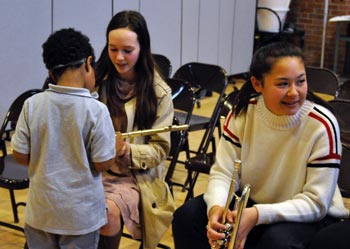 On Friday evening, the Milton Academy chamber orchestra will join the roster of musicians and other performers who fill Boston’s Faneuil Hall Marketplace with sound and entertainment, and it’s all for a good cause.

The students are performing to raise money to buy musical instruments and equipment for students at Boston’s Dr. William Henderson Inclusion School, including mallets and iPads that will help students of all abilities produce musical sounds. The event is one piece of a partnership that Milton music department chair Adrian Anantawan hopes will expand opportunities for disabled and typically developing student musicians to make art together.

“We want to figure out ways that we can connect through music, because it’s one of the languages that transcends so many cultural boundaries, socioeconomic differences, and, in this case, builds a bridge between public and private institutions,” Adrian says.

Milton students—including an elf on the keytar—will perform near the Faneuil Hall Christmas tree from 7–8 p.m. Friday night, playing holiday songs and handing out free hot cocoa. They will have lyrics available for passersby to sing along, and even some percussion instruments people can use to join in. The lyric sheets include information about the fundraiser, in order to introduce the public to the program.

Henderson, a K–12 public school that spans two campuses in Dorchester, is a nationally recognized inclusion program. Thirty percent of Henderson students have a disability, whether physical or developmental; they attend classes alongside students with more typical development. Each classroom has a special education teacher and a general education teacher.

In November, Milton’s chamber orchestra visited Henderson to perform for its kindergartners, then spent time with the students for an “instrument petting zoo.” Because Milton’s students mirror Henderson’s in age, Adrian believes that opportunities for peer mentorship are ripe.

Adaptive instruments and ever-improving sound technology provide access for people with disabilities to make and perform beautiful music. The cost of such instruments can be a barrier to people who want to learn, Adrian says.

“It’s not about separating students based on ability,” he says. “It’s about bringing them together.”