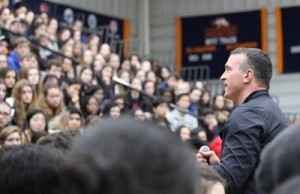 Students often hear about drug addiction and alcoholism through the lens of a person who has permanently damaged their life, but young people should be thinking about the initial decisions that can start dangerous habits, said motivational speaker and former professional basketball player Chris Herren.

“I think we put too much focus on the worst day, and we don’t talk enough about the first day,” said Mr. Herren, who spoke to Milton students as this year’s Talbot Speaker.

Mr. Herren grew up in Fall River, Massachusetts, where his basketball prowess caught the attention of national media and college scouts. He was a central character in a book about the Durfee High School basketball team, Fall River Dreams. When he signed to play at Boston College, sportswriters declared him—and other eventual-NBA standouts—the bearers of a northeastern basketball renaissance.

He said he started drinking alcohol at 14, later abusing prescription drugs and, eventually, heroin. Mr. Herren’s BC career was short-lived after an injury and several failed drug tests; later, he transferred to California State University, Fresno. He eventually played for the Denver Nuggets and Boston Celtics, as well as several international teams.

Mr. Herren has been sober for over 10 years, and through his program Herren Talks has spoken to over one million students, athletes and organizations about the importance of recognizing why addictions begin. An early red flag is a student not feeling confident in social situations without drugs or alcohol, he said.

“I’ve met kids who were struggling and gotten sober in high school, and those kids are my heroes, because they feel good enough about who they are.” he said. “I wish that I had felt good enough.”

Mr. Herren is the founder of the Herren Project, which provides addiction and recovery services to people taking their first steps toward sobriety, and Herren Wellness, a holistic residential program for people in recovery.