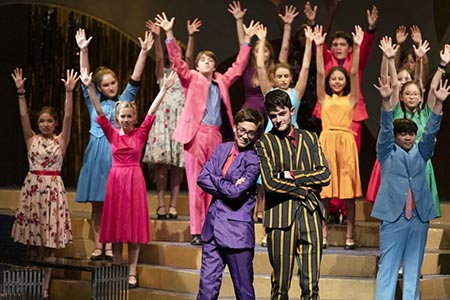 This year’s Class IV Follies, a revue highlighting the performing arts talents of the Class of 2023, follows the theme of masks, director and performing arts faculty member Eleza Kort says.

The performing arts department shifted its fall production schedule this year so a limited run of the Class IV Follies is scheduled for Parents’ Weekend. The show runs Thursday, October 24, and Friday, October 25, with both performances at 7:30 p.m. in King Theatre.

“The Class IV Follies is a new tradition, where we build a cabaret-style show around the kids that we have,” Eleza says. “The idea for the theme is that our masks are the emotions we wear on our face, and we have songs and scenes that represent those ideas. We picked this theme because we wanted to work with relationships and personalities.”

Nineteen members of Class IV are performing in the show, showing their talents in everything from the stand-up bass to sketch comedy. Performances include a choral version of Cyndi Lauper’s “True Colors,” “Revolting Children” from Matilda the Musical, and “Sit Down, You’re Rocking the Boat” from Guys and Dolls.

“Putting on a show is an incredibly bonding experience, so they get to know other kids in their class, and they each have their own moments to shine, which I think is what’s special about the Follies, as opposed to doing a play,” Eleza says. “This is also an exciting way to introduce them to a wide range of pieces from different shows that they may have never known before.”