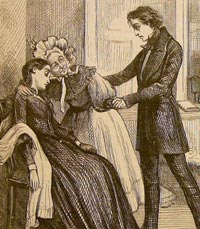 Charles Dickens’s story Nicholas Nickleby will unfold on the stage of King Theatre as more than 20 Class IV students bring to life the nineteenth-century adventures of a young boy traveling to London to seek his fortune. Performing arts faculty member Eleza Moyer, the play’s director, says although the story addresses serious issues, the light-hearted moments are many. Milton’s version of the story is slimmed-down from the original eight-hour adaptation.

Zachary Mustin plays Ralph Nickleby, the ruthless uncle who does everything he can to prevent Nicholas from succeeding. Zach says the Class IV Play is a great experience because it gives freshmen the chance to portray major roles and get to know one another. He is also relishing his part: “It’s fun to shout and sound evil! The whole experience is so different from plays I did when I was younger.”

Dorsey Glew plays Smike, an older boy whom Nicholas befriends and runs away with to London. “I performed roles in my middle school plays, but this character has so many layers, which is a cool challenge,” says Dorsey.

The Class IV Play, a long-standing performing arts tradition at Milton, is an all-inclusive and beloved class project. Class IV students not on stage are contributing behind the scenes, acting as ushers, poster designers, or joining the audience in support of their classmates. Nicholas Nickleby runs in King Theatre on Thursday, November 13, and Friday, November 14, at 7:30 p.m., and on Saturday, November 15 at 7 p.m.