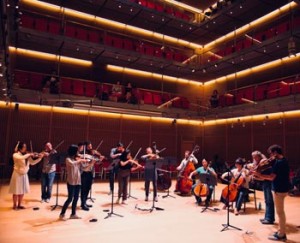 Strings players from Milton’s Chamber Orchestra watched members of A Far Cry, the Grammy-nominated string ensemble, play a few measures of a Haydn minuet before a pause in the action. One musician suggested a slight change to the speed of the melody while others nodded in agreement. Another chimed in with a reminder about the dynamics of a section. They started again, the adjustments made.

“The unique thing about A Far Cry is that they don’t use a conductor,” said Milton’s music department chair, Adrian Anantawan. “They’re a fully democratic orchestra and they make decisions as a group. The leadership is shared.”

The Milton group visited an open rehearsal in the Isabella Stewart Gardner Museum’s Calderwood Hall, a modern, four-story performance space behind the historic Boston art museum. Students took notes as A Far Cry, this year’s Gratwick visiting performers, shared their insights and corrections to their piece.

The rehearsal was a master class, not only in classical music, but in deep listening and focused cooperation. Adrian hoped the trip would encourage Milton’s performers to take on a similar leadership style and inspire them through the encounter with world-class musicians. During a break in the rehearsal, students broke into groups according to their instruments and took the opportunity to ask questions of the professional musicians. Part of the reason for the visit was for the students to get to know and forge relationships with the musicians in a deeper way than a guest concert would allow, Adrian said.

“Our students are here to observe this process,” Adrian said. “One of the pieces we’re working on is similar to a piece of music A Far Cry is doing, so hopefully we’ll be able to pick up on some of how they work and be able to apply that to our performances throughout the year and our spring break tour in Hong Kong.”

Some of the Milton students are working on composing a piece for the Gratwick Concert on Sunday, October 20, Adrian said. Tickets for the concert are reserved for students, faculty and staff.

The Gratwick Concert Series, which is in its 89th year, was established by Dr. Mitchell Gratwick, a former Milton Academy faculty member, in honor of his wife, Katharine Perkins Gratwick, a cellist and 1924 graduate of Milton Academy. The series, which offers Milton students the opportunity to enjoy an intimate classical music performance, has brought world renowned musicians to the School. Past Gratwick artists have included Joshua Bell, the Juilliard String Quartet, Benny Goodman and the Trapp Family Singers.