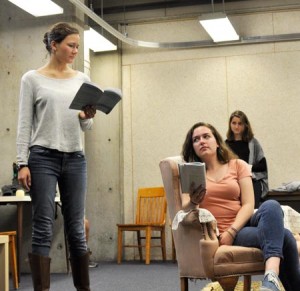 Milton’s fall performing arts schedule features a scandalous trickster, the origin story for a beloved character, and a family comedy that mines the depths of dissatisfaction. First on the schedule is Molière’s Tartuffe, a 17th-century comedy about a charlatan who fools gullible members of a family into trusting him with charm and false claims of piety. Director and performing arts department chair Peter Parisi chose an English translation that matches the original French play’s rhyming-couplet structure.

“We’ve been doing musicals for the last several years, so we’re mixing it up,” says Peter, who notes that even those who are unfamiliar with Tartuffe will recognize and understand some familiar themes. “There are a lot of elements that make this a very timely choice.” Most of the 16 students involved in the production, who will work in period dress on a period set, have performed before, either at Milton or elsewhere.

Next, the Class IV play, Peter and the Starcatcher, features an ensemble cast, who unravel the back story of Peter Pan and Neverland. The play, directed by performing arts faculty member Eleza Moyer, is a “big production” filled with magic and humor. “It’s a really beautiful script. It’s funny, it’s poignant, full of nostalgia and wit,” Eleza says. “This cast has been doing a great job. We have a phenomenal group this year.” The Class IV play is a long-standing performing arts tradition involving the entire class. Approximately 30 students will comprise the on-stage cast; students who are not on stage contribute to other parts of the production.

Rounding out the fall schedule is this year’s 1212 play, Vanya and Sonya and Masha and Spike. Written by Christopher Durang, the comedy is a nod to Anton Chekhov and features three siblings coping with the challenges of getting older. The six student cast members are Nick Gistis (III), Matthew Tyler (II), Abigail Foster (III), Clara Wolff (III), Charlotte Moremen (III) and Emma James (II). Evan Jenness (II) is the stage manager and performing arts faculty member Shane Fuller is directing. “There are a lot of emotional layers to these characters,” says Abigail. “We all put a lot of thought into understanding our characters. They’re surprisingly complex.” The 1212 play is a Milton tradition featuring intimate productions with small casts and challenging material.