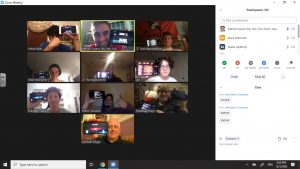 Dorm faculty and students are finding creative ways to maintain dorm traditions during this period of remote and hybrid learning. In Goodwin House, they’ve continued to celebrate each student’s birthday. However, instead of singing collectively over Zoom, one student plays a musical instrument rendition of “Happy Birthday” to share. So far, there have been oboe, violin, and beatboxing performances. In the most recent one, English faculty member Elaine Apthorp played her guitar and sang.

Owens said care packages were sent to all Goodwin students earlier in October, and in all the houses, a new student mentoring program was launched at the beginning of the school year. Returning students who were interested in serving as mentors applied and were then paired with new students. Mentors and mentees were also placed in the same dorm families who will meet over the course of the year.