Conor French ’99 Will Be 2016 Graduation Speaker 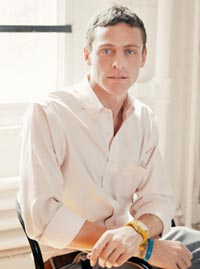 A corporate attorney turned social entrepreneur, Conor French ’99 is the CEO of Indego Africa—a nonprofit enterprise that partners with cooperatives of nearly 500 female artisans in Rwanda and Ghana. Indego Africa tries to break cycles of poverty by providing women with the tools and support to flourish as independent businesswomen and drive development in their communities.

Indego Africa supports its artisan partners by exporting, marketing, and selling their products—clothing, jewelry, accessories, home décor—online and to retailers like J.Crew and Nicole Miller. Indego Africa pools profits from sales, donations and grant support to fund training in business management, entrepreneurship, technology and literacy for its artisan partners.

Conor began his career practicing law at Latham & Watkins, where he represented public and private companies, investment banks, private equity firms, and investors. He served as pro bono counsel to Ashoka, in which he structured partnerships that supported the organization’s global network of social entrepreneurs. This work with Ashoka sparked in Conor a shift toward social impact entrepreneurship.

A frequent speaker and writer on issues related to economic development, social innovation, global partnerships, women’s empowerment, and non-profit management, Conor has been recognized by Diplomatic Courier as one of the most influential foreign policy leaders under 33; by Yoxi as a Social Innovation Rockstar; and by Ellevate Network as a Guy Who Rocks.

Conor earned a bachelor’s degree in history and English from Georgetown University and his law degree at New York University. He is a founding member of the Alliance for Artisan Enterprise and a Truman National Security Project fellow. He also serves as general counsel for Funding Circle USA—a global marketplace for small business loans—where he is responsible for U.S. legal and regulatory affairs. He serves on the New York State Bar Association’s Committee on Attorney Professionalism and is qualified to practice law in California, District of Columbia, Massachusetts and New York.