In Conversations About Gender, Students Should Listen to Learn, Dr. Jennifer Bryan Says 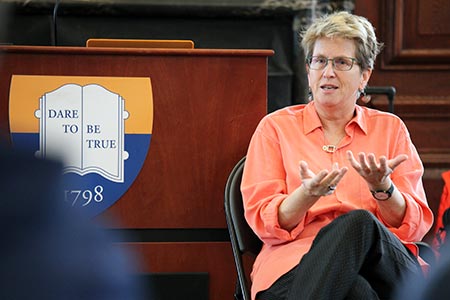 Understanding the differences between gender and sex is key to creating a more welcoming and inclusive world, said Jennifer Bryan, a nationally recognized expert in gender and sexuality diversity.

Sex is biological, assigned at birth according to a baby’s anatomy, while gender refers to certain cultural or social attributes, Dr. Bryan said. Both exist on spectrums: a person’s gender may be male, female, some combination of both, fluid, or neither; biologically, people are born with reproductive systems, hormones and genetics that indicate male or female sex, or some combination of both.

“It’s important, as we talk about these things, to ask, ‘What’s your gender story? How does your understanding of who you are influence your experience in the world?’” Dr. Bryan said. “If we’re going to have this conversation, we have to expect that things could be ambiguous, complex and contradictory… What matters is that we want to hear each other’s stories, and we have to be curious. We have to listen like we might learn something.”

In introducing Dr. Bryan at the multicultural assembly, Heather Flewelling, Milton’s director of multiculturalism and community development, also reaffirmed the School’s commitment to gender equity and inclusion, noting recent efforts such as adding all-gender bathrooms in every academic building and ongoing work toward creating inclusive spaces on campus.

Given the wide range of gender identities—including transgender and non-binary, meaning neither male nor female—and the diversity of biological sex indicators, some efforts to categorize people using binary labels are misinformed and dangerous, Dr. Bryan said.

“Saying that a person’s biology is everything is inadequate,” she said. “That’s just one data point.”

Legal and policy measures protecting the rights of transgender people—such as anti-discrimination laws and protected access to public facilities—are being threatened by federal and state initiatives, including a federal proposal to narrowly define a person’s gender based on the sex they were assigned at birth. During a question and comment session following Dr. Bryan’s presentation, a transgender student received applause after saying that her gender identity is a fact, regardless of others’ opinions or political debates.

Dr. Bryan is the founder and principal of Team Finch Consultants and the author of From the Dress-Up Corner to the Senior Prom: Navigating Gender and Sexual Diversity in PreK-12 Schools. A graduate of both Princeton University and Teachers College, Columbia University, she began her career as a teacher and coach at The Hotchkiss School. Trained as a counseling psychologist, she offers specialized trainings to preK-12 communities across America.