Convocation Speakers Encourage Milton Students to Know, Challenge and Hear One Another 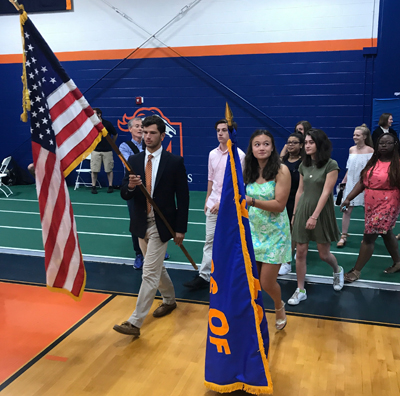 “Know, and be known,” Head of School Todd Bland urged Milton students during Convocation on Friday morning, asking them to not run from difficult conversations, and instead seek to understand each other.

“I’m a believer in the truism that author Andrew Solomon is well known for saying: ‘It is nearly impossible to hate anyone whose story you know,’” Mr. Bland said. “I would carry that a step further: It is also far easier to maintain good faith in those whose stories you know. Let us do that for one another.”

Convocation marks the official start of the academic year, with a formal traditional ceremony in which Mr. Bland, Upper School Principal David Ball and Milton’s co-head monitors, Kailee Silver (I) and Greg Livingston (I) spoke, each asking students to embrace one another’s story and differences.

Students can set the tone for inclusion and respect in the School community by practicing “radical self-awareness,” Principal David Ball said. Mr. Ball, with joking self-deprecation, described his foibles as a young man in physical education classes and soccer camps, to illustrate the differences between humiliation and humility. The latter requires selflessness, generosity and love, he said.

Mr. Ball introduced new faculty members and presented Kailee and Greg with the James S. Willis Jr. Memorial Award before concluding Convocation, as students left for their first classes of the year.