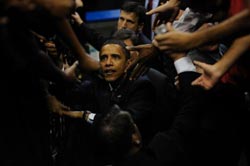 Scout Tufankjian’s images of Barack Obama’s campaign, some of the most evocative and expressive printed, described his engagement with the country over time.  They appeared in major newspapers and magazines throughout the world including Newsweek, Rolling Stone, and Esquire.  They are now collected in Scout’s first book: Yes We Can: Barack Obama’s History-Making Presidential Campaign (powerHouse Books).

A political science major at Yale and politically active during her Milton days, Scout committed herself to following what would become Barack’s campaign after she covered a book-signing by Barack in December 2006. The effect of the senator from Illinois on his audience deeply impressed her; she spent the next 23 months close at hand, visually documenting not only the candidate, but the response of the people who increasingly came to believe in him.

According to an article in The Boston Globe by Mark Arsenault heralding Scout’s book, “Her knack for showing Obama’s effect on people is what impressed Daniel Power, chief executive officer at powerHouse Books. “These photographs told not [Obama’s] story, but the story of his campaign – the hope, the change, the history of it all – visibly and literally affecting people as they witnessed him,” he said. “No other body of work captured the rapture and the nuances, the effect . . . his campaign was having in so many parts of the country, in so many ways.”

Scout had previously focused on imagery that described the lives of ordinary people living in deeply troubled lands. After Yale, Scout traveled as an independent photographer to Northern Ireland and then Gaza.  Her book provides remarkable testimony to the range of emotions Barack Obama engendered in Americans of all ages and from every corner of the country.  His own tireless effort to reach both the political cognescenti and political neophytes develops powerfully in the pages of Yes We Can.  You will see her images of the inauguration, and perhaps you will talk with her at a stop on the book tour.  If you’d like to see more, visithttp://www.scouttufankjian.com/main.php.