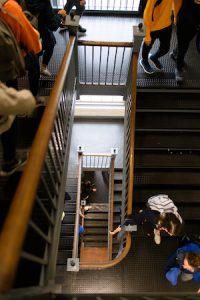 Milton Academy’s most ambitious campaign in School history, Dare: The Campaign for Milton, concluded on June 30. Dare made a commitment to the people of Milton, with student financial aid and faculty recruitment and retention named as top priorities, along with support for the Milton Fund and campus improvements.

“We launched Dare to put Milton on a firm financial foundation,” Head of School Todd Bland said. “When we began the campaign in 2015, our endowment was two to three times smaller than our peer schools. By growing our endowment, we are making a commitment to investing in our students and faculty today and to securing Milton’s future.”

Some early results of Dare include growth of the financial aid budget from $8.9 million to $13.1 million, a 2015 faculty-wide salary increase, a more robust faculty professional development program, and upgrades to our many academic buildings and residences.

Our eight student houses were renovated to enhance the student living experience, including larger or new common rooms and study spaces, improved kitchens, and new furniture. In addition, select buildings saw new lighting, improved sound proofing, and new roofs. In support of faculty housing and retention, Milton has increased the number of family-sized homes, including two newly-built four-bedroom houses. In addition, the School has renovated more than twenty faculty houses and apartments.

These investments were all made possible by support from thousands of alumni, parents, faculty, staff, and friends. “This campaign prompted many of us to ask, ‘If I don’t support Milton now, then when? And if not me, who?’” said Campaign Committee Vice Chair Stuart Mathews P ’13 ’17 ’17. “My kids benefited from the legacy others left, and it’s our responsibility to provide this experience for others.”

The campaign raised more than $182 million, exceeding its $175 million goal. Endowment funds provide security during uncertain economic times and lessen Milton’s reliance on tuition dollars. Milton’s endowment distribution is set at 4.5 percent of the fund’s value from the previous 12 quarters, allowing Milton to put some of the financial resources to work today, while the remainder is reinvested for the future. Through the success of Dare, our endowment now generates more than $5 million in annual revenue for the School, a 63 percent increase since the start of the campaign. Those funds, combined with a successful Milton Fund now raising $5 million annually in support of the operating budget, directly benefit today’s students and teachers.

Head of School Todd Bland sees a renewed commitment to the health of the School through annual, planned, and endowment gifts. “This campaign will make a lasting difference for our students and teachers,” Bland said. “I couldn’t be more inspired by what we accomplished on behalf of the people of Milton, and the optimism I have for our future.”

More information can be found at www.milton.edu/campaign.