“Dare to be true” is a lesson for life, Grammy-nominated musician Jidenna tells students 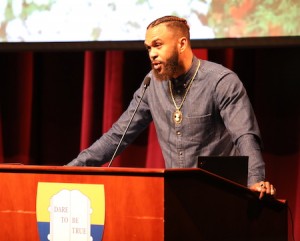 Rapper and singer Jidenna Mobisson ’03 returned to campus as part of an expanded Transition Program, serving as the keynote speaker for new students of color and international students, and as a panelist in a conversation with their parents. The events preceded programming throughout Labor Day weekend for all students new to Milton.

“It’s the first day. I know you feel a little bit nervous, but I want to say congratulations to each and every one of you,” he said. “I sat in the same seats you’re sitting in right now, with students who were just like you. Some of the people here that you don’t know yet will be your best friends for life.”

A Milton tradition for more than three decades, the Transition Program has provided a foundation and community-building introduction for students of color and international students; this year, the program expanded to include all new students. Events throughout the weekend before the start of classes are designed to welcome new Milton students, foster conversation and thought about identity and culture, and establish a sense of belonging. This year, all new students stayed on campus throughout the program, during which they participated in team-building events, such as an Amazing Race that acquainted them with the campus; met with their advisors and class deans; learned about opportunities for student support; and joined conversations about the diversity of life at Milton.

Transition Program activities will continue throughout the academic year, and dedicated programming for students of color and international students remains a core component of the effort.

Born in Wisconsin, Jidenna moved to Nigeria with his family and lived there until the age of 6. Upon returning to the United States, the family settled in Massachusetts. Throughout his youth, he encountered racism from children and adults that made him question his sense of belonging in certain places. His family lived in the working-class Boston neighborhood of Mattapan, which borders Milton, but felt like a world away from campus. He recalled feeling embarrassed by his mom’s car, asking her to drop him off at the edge of campus on the days he didn’t walk from the train station.

“For some of you who have a story similar to mine, there may be certain times when you feel like you don’t deserve to be here, and I’m here to tell you that you do,” Jidenna said. “You’ll face challenges here, and you’ll have to figure out ways to overcome them, but just know, first and foremost, that you deserve to be here. That’s the thing I wish I had told myself when I was 14.”

Jidenna offered tips for rising to the challenges of a rigorous environment like Milton. First, he advised students to work closely with faculty, because teachers are invested in student success—he remains in touch with faculty who have become friends over the years. He also advised students to embrace the diversity of the School and to get to know students with different identities and backgrounds from their own. On top of sharing their lives with faculty and peers, students should follow the School’s motto.

Students should expect to grow in their understanding of identity during their time at Milton, Jidenna said. Through his African American history course, Jidenna learned about leaders who helped shape his understanding of what it means to be black; through his peers with different identities, he learned the importance of finding—and using—one’s own voice.

Following his graduation from Milton, Jidenna attended Stanford, where he studied ritual arts. He is signed to Janelle Monáe’s Wondaland Records, and his song “Classic Man” received a Grammy Award nomination in 2016. This summer, he released the album 85 to Africa, which showcases his influences of African and Caribbean music, hip-hop, and soul.