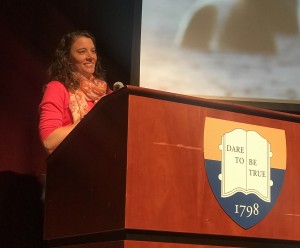 It is okay to take risks, get outside one’s comfort zone, and make mistakes, Deidre Dunn ‘95 told students during the Investment Club and Invest in Girls Assembly. Deirdre is managing director and co-head of global rates at Citi.

Deirdre said that even though she considers herself an introvert and dislikes public speaking, returning to campus to talk about her career was an easy decision.

“But not insignificant in my decision is something that I used to do by accident, but now I do on purpose. I pursue things that make me uncomfortable. You could almost say, I have gotten really comfortable being uncomfortable. And it has been incredibly powerful for me.”

Deirdre, a strong English and history student at Milton, said it was a surprise when she was accepted to MIT. Her freshman year was a struggle, both academically and socially. Failing freshman physics was a wake-up call.

“So I got better at learning how to sift and digest infinite amounts of information. I learned to be more efficient, to work smarter. And, even as the good introvert I was, I learned how to make friends with the geniuses around me, and to ask for help.”

She graduated with a B.S. in chemical engineering and started an internship at Goldman Sachs. This began a Wall Street career trading a variety of different residential and commercial mortgage products. To her, the chaos of the trading floor was similar to growing up with five siblings, which she enjoyed. After six years, she moved to Lehman Brothers, until the firm filed for bankruptcy during the 2008 recession. After that upheaval, Deirdre decided to try something different and moved to London to work for Barclays Capital before returning to New York to continue her career with Citi.

Many of the opportunities that came her way were for positions she didn’t always feel qualified for but “being willing to take risk, whether because I am curious, because I am willfully ignorant, or because I’ve trained myself to survive when overwhelmed, or I’m just plain nuts, it has been one of the best things I could have done for my career.”

Deirdre said now that she is a mother of three, there are new sets of challenges, but she continues to push herself outside her comfort zone and really enjoys her work at Citi.

“I have found that if I just say yes, I take the risk, one way or another, I will figure it out in the moment. it doesn’t mean I won’t fail—I often do—but I have found those failures to be points in a journey, not a destination. And learning that I can recover from them has given me freedom to take risk, to live life uncomfortably.”