Discussion on Race, Identity and Inclusion with Rodney Glasgow 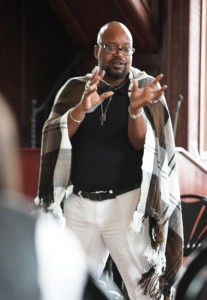 A noted educator, speaker and facilitator on issues of diversity and equity, Rodney Glasgow is on campus this week working with students, faculty, staff and administrators on issues of race and identity. Milton’s administration engaged Mr. Glasgow in response to events this week, in which many Upper School students demonstrated through peaceful sit-ins—a result of rising tensions and incidents of what students viewed as insufficient disciplinary response.

In this morning’s assembly, Mr. Glasgow addressed the entire Upper School, beginning with personal stories illustrating the strength and power of racial epithets—both as someone who bullied at one school and was bullied at another. He spoke about owning one’s own actions; the power of forgiveness; and understanding one another. He then invited students to share their personal experiences from the week—some who had participated in the sit-in and some who had not.

“The privilege of being in this community is that you can make the community what you want it to be,” said Mr. Glasgow.

Mr. Glasgow is also spending time meeting with smaller groups as a listener and facilitator.

Chair of the National Diversity Practitioners Institute, Mr. Glasgow has a long and distinguished career in this work. He serves today as chief diversity officer and head of middle school at St. Andrew’s Episcopal School in Maryland. Mr. Glasgow earned degrees in Afro-American studies and psychology at Harvard University and holds a master of arts in organization and leadership from Columbia. He is an independent school alum, having graduated from Gilman School. He is also president of The Glasgow Group, a consortium of dynamic and innovative consultants.