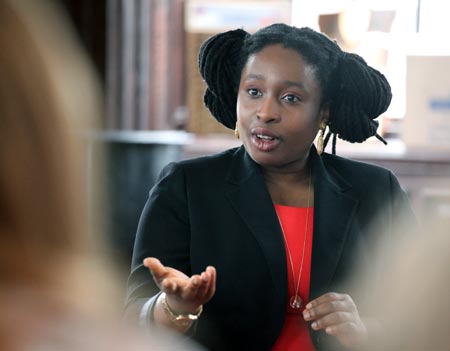 Worldwide, the people most affected by deforestation and marine pollution are those with little or no access to resources to supplement what they’ve lost, said Ms. Agbemakplido. Because they rely on the land, or on fishing, to live, the destruction of natural resources is forcing them away from their homes.

“If we are to continue to rely on natural resources, we need to start listening to indigenous people who live in the natural world,” she said. “We cannot turn a blind eye to how rapidly our world is changing.”

Ms. Agbemakplido visited campus as this year’s Earth Day speaker, sponsored by the student groups Lorax and the Sustainability Club. She is the clean energy program manager for the Mass Climate Action Network (MCAN).

In the United States, the poorest people are those most likely to be affected by corporate polluters and insufficient infrastructure, which directly relates to poor air and water quality, as well as serious health risks. They are also less likely to have access to affordable, fresh food, Ms. Agbemakplido said. Climate and health improvement programs therefore need to be intersectional and inclusive, so that people of all races, genders and income levels have insight into solutions.

“Nothing in America happens by accident,” she said. “There are policies that affect how we live.”

People who want to become advocates for sustainability and environmental causes should reach out to and amplify the voices of those who are not always included in policy discussions and solutions, Ms. Agbemakplido said. For instance, people who rent their homes in lower-income neighborhoods may not relate to solar-power initiatives that cost homeowners thousands of dollars. But they may be interested in having space for a community garden, which can provide healthy food at significantly lower costs than grocery and convenience stores.

“You have to figure out how to market your message in a way that it resonates with the people in front of you at the moment,” she said, adding that disagreement should never be the end of a conversation. “You can protest as much as you want, but you also have to change people’s hearts.”

Prior to joining MCAN, Ms. Agbemakplido was a co-founder of Refugees Welcome! and was also engaged in improving relationships between youth and police in the city of Boston and surrounding areas through her work as a youth and police dialogue facilitator with YW Boston. Wilhemina graduated from the University of Massachusetts Boston with a master’s degree in mediation, and conflict resolution. She is passionate about engaging communities of color in the grassroots efforts to organize for community-based climate action.

Milton’s Sustainability Board investigates ways the School can improve its environmental practice. Named for the Dr. Seuss character that “speaks for the trees,” Lorax is a student group established in 1987 that raises awareness of the environment and our responsibility as stewards.