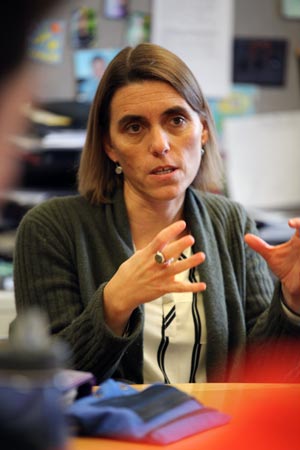 “We think history is understanding the facts, but facts aren’t always clear. Historical narratives are shaped by the individuals doing the telling.”

Independent documentary filmmaker and alumna Sarah Colt ’88 spoke with Class I and II students as this year’s Henry R. Heyburn ’39 Lecturer. Ms. Colt shared her process of developing documentaries of historical subjects, specifically the work involved in creating her film “Geronimo,” one part of the PBS American Experience series on Native American history.

After a warning by her filmmaking mentor to steer clear of the project because “native history is too complicated,” Ms. Colt teamed up with co-director Dustinn Craig, a White Mountain Apache filmmaker based in Arizona. Ms. Colt learned quickly that not all Apaches view Geronimo as the venerated hero he’s often portrayed to be, and that Apache culture—which values the collective group—rejects the idea of exalting one individual above others. Together, the pair set about finding a way to tell the story of an historical legend that respected Apache culture, incorporating Apache stories and perspective.

“The filmmaking process involves a lot of gathering—information, images, video, archival content—and then organizing it to tell a coherent story,” says Ms. Colt, who has worked in public television for nearly two decades. “You want the story to unfold dramatically, like a novel. Our challenge with “Geronimo” was telling this story of someone’s life when various people viewed him very differently. His life and legacy still remains contentious.”

Ms. Colt and Mr. Craig traveled to the remote White Mountain Apache reservation and listened to oral histories from tribe elders. “We wanted the film to tell a slightly different story than what had been accepted up until that point,” she says.

At Milton, Ms. Colt said, she enjoyed U.S. History, but her real passion was photography. “I never thought history would be an integral part of my career. Now, as a filmmaker, I get to be a storyteller and put all these pieces of history together like a puzzle, recreating it, documenting it, in interesting ways. Making these films has revealed to me that history is very much alive, and that sometimes the process is almost more important than the final product.”

Before starting her own company in 2008, Ms. Colt worked for David Grubin Productions, where she produced the highly acclaimed biography “RFK” and earned an Emmy Award for Outstanding Science, Nature, and Technology for co-producing “The Secret Life of the Brain.” Her credits include the Emmy-nominated biography of Walt Disney and a biography of Henry Ford, both for American Experience; and “A Nation Reborn” and “A New Light” for PBS’s Frontline and the American Experience series God in America. She is now directing and producing a series about the Gilded Age, which will air on PBS in 2018. In 2004, Ms. Colt was awarded an International Reporting Project Fellowship through Johns Hopkins School of Advanced International Studies and traveled to Namibia to report on the racial imbalance of land ownership in Southern Africa.

Ms. Colt attended Harvard University where she began her documentary career as a still photographer and earned several prizes for her work, including a Radcliffe Traveling Fellowship that sent her to Zimbabwe for a year.

Ms. Colt spent two days on campus, in U.S. History classes, speaking with students. The Henry R. Heyburn ’39 Lecture was established in 1991 to commemorate Mr. Heyburn’s deep love of history and geography and his dedication to Milton.