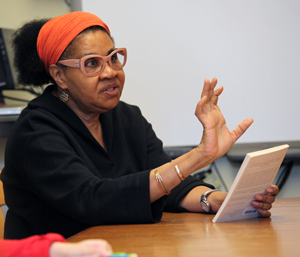 “One little piece of advice for the writers: Anything that anybody tells you to do, don’t do it,” award-winning author Jamaica Kincaid told Milton students this week. Ms. Kincaid was this semester’s Bingham Visiting Writer.

Ms. Kincaid spent two days on campus, in which she spoke to most Upper School students during an assembly, answered questions, and visited English classes, where she workshopped some student pieces. Traditionally, visiting Bingham writers speak between readings of their work. Ms. Kincaid did read a short piece from a 1980 issue of The New Yorker called “Expense Account,” in which she criticized the economist Milton Friedman, but she took an opportunity on Wednesday, which was International Women’s Day, to reflect on her career and on womanhood.

“When I first came to America, feminism was a topic of great debate,” Ms. Kincaid said. “I don’t know why it was resisted. I don’t know why we have to make the case for ourselves.”

Born Elaine Potter Richardson in Antigua, Ms. Kincaid arrived in the United States at 16, sent by her mother to work in wealthy homes as a servant with the expectation that she would send money home. She refused, and instead spent it on herself, becoming “the best-dressed nanny in New York.” In her early 20s as her professional writing career began, she changed her name to distance herself from her family. In her first writing job at the teen magazine Ingénue, Ms. Kincaid interviewed Gloria Steinem about her teenage years.

Soon, she joined the staff of The New Yorker, where her essays earned her national acclaim. Her works of fiction frequently examine topics of race, gender and sexuality, and colonialism, along with complicated mother-daughter relationships. Critics have sometimes described Ms. Kincaid’s work as “angry,” which she rejects as an unfair generalization that is ascribed to black women.

“There is an overwhelming effort to make some work into something that it isn’t at all, but that doesn’t stop me from recognizing that there is a tremendous amount of injustice in the world,” she said. “Anger is a proper response to some things [but]… to have an identity based on what someone else has given you seems to violate who you might really become.”

Ms. Kincaid is a member of the American Academy of Arts and Letters and she teaches in the English, African and African-American Studies Department at Harvard. She published her first collection of stories, At the Bottom of the River, in 1983. Annie John, her first novel, followed in 1985.  Other novels include Lucy; The Autobiography of my Mother, a novel set on Dominica and told by a 70-year-old woman looking back on her life; and Mr. Potter. A Small Place is a book-length essay about the effects of colonialism. My Brother chronicles her brother’s battle with AIDS.  Her love of gardening has also led to several books on the subject, including My Garden and Among Flowers: A Walk in the Himalaya, a memoir about a seed-gathering trek with three botanist friends. See Now Then, her most recent novel, won the Before Columbus Foundation’s American Book Award in 2014.