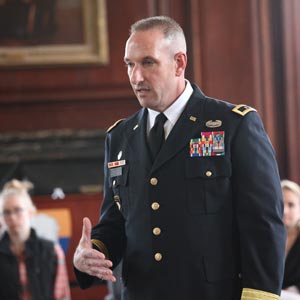 Milton’s Veterans Day speaker, Army Brig. Gen. Richard F. Johnson, P’19, encouraged Upper School students to ask themselves two questions: “What inspiration can I draw from the service of veterans?” and, “How will I serve?”

The men and women who have served in the United States armed forces have built a legacy of leadership and service for future generations, who can serve in any capacity they choose—whether in the military or not, the brigadier general told students. Quoting Milton alumnus Robert F. Kennedy, he urged students to meet the challenges of difficult times.

“’All of us may wish, at times, that we lived in a more tranquil world, but we don’t, and if our times are difficult and perplexing, so are they challenging and filled with opportunity,’” said Brig. Gen. Johnson, whose daughters Julia and Kiely are in Class II. He added: “In a world that’s fraught with peril and those that would do harm, your veterans have been the guardians of freedom and the protectors of peace and humanity. Celebrate their service and sacrifice by making your own contribution. Find your future, decide how you will serve, and pay the best tribute that you can to those who have served you.”

Brig. Gen. Johnson said Veterans Day presents a perfect time to reflect on military history in America—the advances in medicine and technology, great victories in the nation’s founding and in world wars, as well as the pain of casualties and the unseen wounds of combat.

Military service provides structure and a network of people upon whom a soldier can rely, knowing that unity is critical to success and safety—that same reliability may not be as available in civilian life. It’s a difficult transition, said Brig. Gen. Johnson, though a growing number of organizations and companies are working to help veterans find success in non-military careers after their service.

Characteristics that make people good leaders—discipline and strategy, for example—are present in soldiers, he said, adding “we’re not just gun-slingers.” There are veterans in every field, and their work ethic should be an inspiration to many, even outside the military, Brig. Gen. Johnson said.

Military personnel in the United States are not just fighting to protect territories, but for a core idea, he said.

“What we fight for, as Americans, isn’t as simple as the old ideals behind warfare,” Brig. Gen. Johnson said. “There’s something deeper. The defense of our ideals, and the defense of people’s freedom, is ingrained in the way we think. We believe that, we teach that and we expect that. It’s my mandate as a leader to make sure that my soldiers understand that, and that they operate from that premise in everything that they do.”

Brig. Gen. Johnson is currently assigned as the Land Component Commander, Massachusetts Army National Guard. He is responsible for all aspects of training, readiness, and force development for a formation of over 6,000 soldiers. He serves as a Joint Task Force Commander and Contingency Dual Status Commander in domestic security and natural disaster response operations. He is a highly decorated veteran of four combat deployments, first as a platoon leader in Iraq and Kuwait during Operation Desert Storm, company commander in Afghanistan in 2009­–10, and as a senior combat advisor with the 101st Airborne Division in Afghanistan in 2012­–13. Brig. Gen. Johnson is scheduled to return to Afghanistan beginning in 2018.

He is a Senior Executive Fellow at the Harvard Kennedy School. He is a graduate of the U.S. Army War College and Command and General Staff College. He completed the National Security Management Fellowship at Syracuse University and holds graduate degrees in Criminal Justice and Public Affairs from the University of Massachusetts, and he was a National Security Fellow at the Harvard Kennedy School.