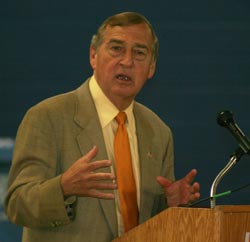 Dr. Graham Allison, author of the bookNuclear Terrorism: The Ultimate Preventable Catastrophe, was this year’s keynote speaker, leading the 2008 Milton Academy Seminar Day on April 30. Dr. Allison directs the Belfer Center for Science and International Affairs, at the JFK School of Government, Harvard University. He has served as special advisor to the secretary of defense under President Reagan and as assistant secretary of defense for policy and plans under President Clinton. Dr. Allison has twice been awarded the Department of Defense’s highest civilian award, the Distinguished Public Service Medal.Nuclear Terrorism: The Ultimate Preventable Catastrophe, published in 2004, is now in its third printing and was selected by the New York Times as one of the “100 most notable books of 2004.”

More than 20 speakers followed Dr. Allison on Wednesday, including many Milton Academy graduates—experts and activists on a wide range of publicly debated United States and international issues. This lively day of information and discussion, now called the Keyes Seminar Day, has been one of Milton’s most important traditions since 1977. It was recently renamed in honor of its founder, faculty emeritus Peter Keyes, a legendary promoter of student interest in political process as well as public and governmental affairs and service. In the Milton spirit of developing students’ confidence and competence to live by our motto, “Dare to be true,” Seminar Day brings to campus individuals who have made compelling choices. Our guests during Seminar Day are scholars, business people, scientists, educators, writers, political leaders and artists making a difference in the world.

Speakers include health care policy experts; social entrepreneurs working on issues such as educational reform, sustainable agriculture, or malaria prevention; environmental activists; filmmakers; journalists; political activists and shapers of public policy; and a graduate promoting social change in and through sports, who was a member of the U.S. National Soccer Team and a member of the U.S. Olympic Team in the 1996 and 2004 Paralympic Games.

During each time block students choose from among many presenters.  Exchanges that occur on Seminar Day stimulate ideas and conversations over weeks to come. Seminar Day is held every other year and alternates with Community Service Day—another occasion that encourages students to think beyond their immediate community and concern themselves with the complexity and opportunity afforded by the world.

Graham Allison
Nuclear Terrorism: The Ultimate Preventable Catastrophe
Douglas Dillon Professor of Government, Director of the Belfer Center for Science and International Affairs, JFK School of Government, Harvard University. Dr. Allison has served as Special Advisor to the Secretary of Defense under President Reagan and as Assistant Secretary of Defense for Policy and Plans under President Clinton.  He has twice been awarded the Department of Defense’s highest civilian award, the Distinguished Public Service Medal.  Dr. Allison’s latest book, Nuclear Terrorism: The Ultimate Preventable Catastrophe, was published in 2004 and is now in its third printing and was selected by the New York Times as one of the ‘100 most notable books of 2004’.

Paula Johnson (Studio Theatre)
Does your gender matter?
The first woman in the history of Brigham and Women’s Hospital to be chosen as chief medical resident, Johnson is a women’s health specialist and a pioneer in the treatment and prevention of cardiovascular disease.  She conceived of and developed one of the first facilities in the country to focus on heart disease in women.

John E. McDonough (King)
Ten Things Everyone Should Know about Health Care Policy
Executive Director of Health Care for All, Massachusetts’ leading consumer health advocacy organization and teaches at the Harvard School of Public Health.  From 1985 to 1997, he served as a member of the Massachusetts House of Representatives where he co-chaired the Joint Committee on Health Care.

Rachad Itani (FCC)
Oil Cube, Ice Cube: CO2 reductions
CEO, Balderrie Entreprises, Inc. and Executive Partner & CEO, Xenel-Balderrie, His company was the first private Clean Development Mechanism (CDM) in the countries of the Middle East and he has co-authored a bill for emissions reduction system based on the Upstream Carbon Offset model, a better alternative to the deeply flawed cap-and-trade system being considered by the US Senate.

Jacqueline Bhabha P’07 (Orchestra Room)
Addressing Trafficking in Humans: The Human Rights Dilemma
Prof.  Bhabha is the Jeremiah Smith Jr. Lecturer in Law at Harvard Law School and the Executive Director of the Harvard University Committee on Human Rights Studies. She was previously a practicing human rights lawyer in London and at the European Court of Human Rights in Strasbourg.   Her writings on issues of migration and asylum in Europe and the United States include a coauthored book,Women’s Movement: Women Under Immigration, Nationality and Refugee Law.

David Stowlow (Weld Library)
Education Reform and the Rise of Out of School Time
David is the Director of Strategic Development at Citizens Schools, a leading national education initiative that uniquely mobilizes hundreds of staff and thousands of adult volunteers to help improve student achievement by teaching skill-building apprenticeships after school.

Kerry Healey P’10 (Chapel)
Moving Beyond Rhetoric to Authentic Political Change
Healey served as Lieutenant Governor of the Commonwealth of Massachusetts from 2003-2007. Healey assumed a broad range of responsibilities in the Romney-Healey administration, including leading the administrations’ successful efforts to strengthen drunken driving penalties, establish a witness protection and gang violence prevention program.  She is most proud of her role in helping to found three Recovery High Schools to provide drug-free learning environments for students in recovery, and in reducing drunk-driving related deaths on Massachusetts’ roads thanks to Melanie’s Law.  Recently, Healey served as a Senior Advisor for Governor Mitt Romney Presidential Campaign.

Dan Rea (FCC)
Politics, talk radio and journalism
Talk radio host, WBZ 1030AM.   Rea’s career at WBZ-TV included assignments in over half of the United States. Much of his domestic travels have involved political coverage, including all of the presidential elections from 1976-2000. In addition Rea has traveled to Europe on ten occasions to cover stories effecting New Englanders, including four trips to West Germany where he covered the return of Americans that were injured or held hostage in the Middle East.  Rea traveled to Poland with Cardinal Bernard Law in August of 1986 to direct attention to relations between the Catholic Church and the Polish government. The trip included an emotional visit to the Nazi death camp at Auschwitz. In addition to receiving a New England Emmy Award for his coverage of that day at Auschwitz, Rea was also awarded the 1987 United Press International Award for outstanding news reporting.

Theo Spencer ’84(Straus)
The work of the Natural Resources Defense Council
Spencer is a senior project manager with the Natural Resources Defense Council working on global climate change issues. Mr. Spencer has extensive experience as a journalist, working previously as a reporter with Fortune Magazine, New York Newsday, the Albuquerque Tribune and the Stamford Advocate. He has written numerous freelance articles for national publications such as the New York Times Magazine, New York Magazine and Art Forum.

Jesse Robinson ’94 (Thacher)
Teach for America program
Ms. Robinson started her teaching career through Teach for America in a middle school in the Bronx.  She later taught in charter schools in San Jose and Boston and is working to become a principal at an urban school.

Emma Clippinger ’04 (Greeley Auditorium)
A New Kind of Student Activism: Lessons in Social Entrepreneurship from Rwanda
Founder of Gardens for Health International. GHI is partnered with the Rwandese Network for People Living with HIV/AIDS (RRP+). Established in 2003, the RRP+ coordinates the activities of Rwanda’s nearly 1,000 community groups of HIV+ individuals. GHI works with the RRP+ to mobilize associations of HIV+ inviduals around enhanced nutrition through sustainable agriculture training and nutrition education.

Eli Wolff ’95 (Studio Theatre)
Disability in Sports
Wolff is the Manager of Research and Advocacy at the Center for the Study of Sport in Society at Northeastern University and works to support and enhance student and faculty research and advocacy initiatives at local, national and international levels. Wolff has encouraged the application of the scholar-activist methodology with respect to sport and social issues. Wolff was a member of the US National Soccer Team from 1995 – 2004, and a member of the US Olympic Team in the 1996 and 2004 Paralympic Games.

Ian Cheney ’98 (King)
‘King Corn’ and ‘The Greening of Southie’
Ian and Curt Ellis, Ian’s best friend from college, moved to the heartland of America to learn where our food comes from. With the help of friendly neighbors, genetically modified seeds, and powerful herbicides, Ian and Curt planted and grew a bumper crop of America’s most-productive, most-subsidized grain on one acre of Iowa soil. More recently, he directed “The Greening of Southie”, a documentary about the construction of the first “green” residential building, the MaCallan, in Boston.

Elise Forbes Tripp with Nick Morton (Chapel)
As above

Arnold Saltzman GrandP’09 (Straus)
Did we win or lose the Cold War’: Perspectives from a former ambassador
Saltzman served the United States under five presidents in a wide range of policy-level diplomatic and economic assignments in Eastern Europe, Latin America and within the United States. He also served as a naval officer in World War II. He was recently awarded the Order of Honor from the Republic of Georgia, and he has received a Presidential Commendation for his efforts on the International Nuclear Nonproliferation Treaty.

Caroline Sabine and Jesse Robinson (Thacher)
As above

Patrick Cook-Deegan (Greeley Auditorium)
Burma: What you can do
Cook-Deegan was an All-American lacrosse player and played for Brown University and traveling and cycling through New Zealand, Australia, Southeast Asia and the Middle East, starting the Cycle for Schools project and working with a grassroots advocacy organization called the US Campaign for Burma, a group that promotes freedom, democracy, and human rights in the country.

Eli Wolff (Studio Theatre)
As above