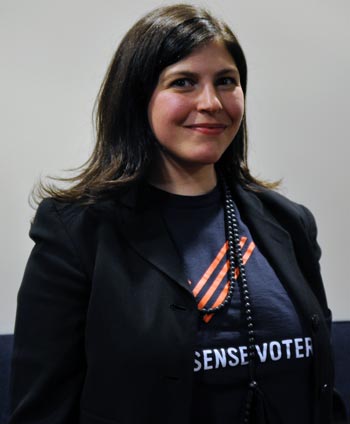 But once you move past messaging from politicians and powerful lobbyists, there is much greater hope for agreement among Americans on both sides of the issue, says Brina, who recently worked as chief strategy officer for Everytown for Gun Safety, and is now a political consultant. She was invited by students to speak about gun control after the mass shooting at Marjory Stoneman Douglas High School in Parkland, Florida.

“What is incredibly inspiring, humbling and somewhat phenomenal to watch is the way the gun safety movement, which was restarted only a few years ago, has successfully built something that is open, agile and able to bring in the kind of energy that has led to people marching in the streets,” she said. “We are proving every day to elected officials that we demand leadership on this. The student leaders all around the country who are pouring into the streets and maintaining the pressure on politicians are permanently changing our political conversation in a way that’s laying the groundwork for policy change.”

Brina led students through the history of gun laws in America, from colonial restrictions on guns in heavily populated areas to landmark gun control laws following the assassinations of John F. Kennedy, Robert Kennedy and Martin Luther King, Jr. She also outlined areas where the gun lobby has supported legislation preventing the federal government from studying the impact of gun violence and protecting gun manufacturers from being held financially liable when their products are used in gun injuries or deaths.

Every day in America, 96 people die from gunshots, which is a gun death rate 25 times higher than that of other developed countries. Though mass shootings at schools and other public areas tend to dominate media coverage of gun violence, they are statistically rare, while suicide and domestic violence account for a significant portion of gun deaths. Gun violence takes a disproportionate toll on communities of color and other marginalized groups, she said. Private sales and illegal gun trafficking make it difficult to ensure that guns are kept out of the wrong hands.

Brina’s interest in activism was sparked when she was a Milton student. She recalled her AP government class, where she first encountered statistics on gun death in America, though in her first several years working in advocacy, public policy, law and politics, gun control was a topic that rarely came up.

“I really started learning about public policy and social change when I was at Milton,” Brina said. “I took a great course about poverty in America, did some community service work here and I think my whole experience of being in such a rich environment that really encouraged critical thinking gave me an introduction to American history, public policy, social movements and social change.”

Brina attended Harvard University and the New York University School of Law. Her career in law, policy and politics has led her to work in commercial litigation and advocacy on reproductive freedom, voting rights and immigration. She was a policy advisor and counsel to New York City Mayor Michael Bloomberg and joined the Mayors Against Illegal Guns team, which evolved into the nonprofit Everytown for Gun Safety following the Sandy Hook Elementary School shooting in 2012.