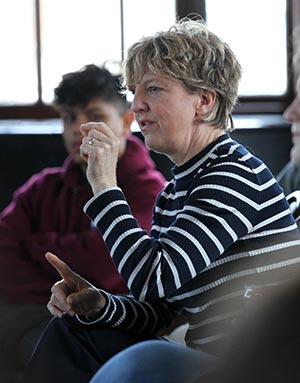 The legal distinction of whiteness as a race did not exist anywhere in the world until 1681, when colonial American lawmakers sought to outlaw marriages between European people and others, sociologist Jacqueline Battalora told Upper School students.

This was, essentially, “the invention of white people,” said Dr. Battalora, who visited Milton as the Henry R. Heyburn guest lecturer.

Previously, people were grouped by their nation of origin, Dr. Battalora explained. But once anti-miscegenation laws preventing marriage between white people and nonwhite people were established further, legal segregation drove division among racial groups, creating an atmosphere and legacy of racism and discrimination the effects of which still resonate today.

“It was truly extraordinary how lawmakers worked to restrict the rights of people of African descent, and generated this presumption of superiority via the new status called ‘white,’” Dr. Battalora said. “There is no genetic basis to the construct of race. It’s about power.

“And because it is man-made, because it’s about power, we can do something about it,” she said.

Anti-miscegenation laws emerged from a significant gender imbalance in the colonies, where men outnumbered women by about eight to 12 men for every woman. The laws benefitted slave owners because if a white woman married an enslaved black man, slave owners were guaranteed generations of free labor from the couple and their children. A decline in poor British citizens available for indentured servitude in the colonies, along with a drop in the price of tobacco and increasing laws decimating rights for people of African descent, combined to create the “perfect storm” for the proliferation of slavery, Dr. Battalora said.

The legacy of these colonial laws continued through the centuries of American legislation and practice, from voting restrictions, to the Chinese Exclusion Act and other immigration and naturalization barriers, to Jim Crow and beyond. Anti-miscegenation laws remained in several states until the landmark Supreme Court decision in Loving v. Virginia declared them unconstitutional in 1967. The result has been lasting, systemic racism, Dr. Battalora said.

White people can feel guilty about the history of white supremacy in America, or they can act to dismantle it, she said.

“Guilt can be debilitating, but we have to remember: Race is constructed. It was created by humans,” Dr. Battalora concluded. “You can choose to be empowered. You can make a conscious choice to break down white supremacy.”

Dr. Battalora was born in Edinburgh, Scotland, and lived in Antwerp, Belgium, before her family relocated to Victoria, Texas. The experience of attending middle and high school in Texas formed her understanding of race in America. She is a lawyer and professor of sociology and criminal justice at Saint Xavier University, and previously worked as a Chicago police officer. She holds a Ph.D. from Northwestern University, and has been engaged in anti-racist training since the mid-1990s. Her book, Birth of a White Nation: The Invention of White People and Its Relevance Today, was published in 2013.

The Henry R. Heyburn ’39 Lecture was established in 1991 to commemorate Mr. Heyburn’s deep love of history and geography and his dedication to Milton as a student, parent and trustee.