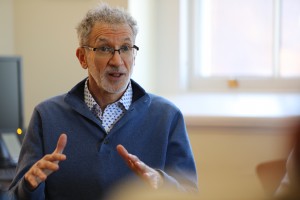 New York City’s vulnerability to rising sea levels and storms goes back to its earliest days, historian Ted Steinberg told history students during the 2019 Heyburn Lecture. Mr. Steinberg is the Adeline Barry Davee Distinguished Professor of History at Case Western Reserve University, and his work focuses on the intersection of environmental, social, and legal history.

Although many residents were caught off guard by severe flooding during Hurricane Sandy in 2012, Mr. Steinberg said the “seeds of New York City’s expansion at the expense of the sea had been planted in the early years.”

Mr. Steinberg gave a historical perspective on how English settlers in the late 1600s started expanding out to the low water mark, filling in the land to make it easier for larger ships to dock. This expansion and land filling continued over the years and centuries, changing the original shape of Manhattan and the surrounding New York City metro area. One example, the wetlands, which are important for flood protection, have decreased from 300 square miles in 1900 to 33 square miles today.

“New York has not done a good job at addressing the coastal flood risk,” said Mr. Steinberg as he showed a map with the city’s current plans to expand out into the East River.

Mr. Steinberg received his Ph.D. from Brandeis University. His latest book is titled Gotham Unbound: The Ecological History of Greater New York. The Henry R. Heyburn ’39 Lecture was established in 1991 to commemorate Mr. Heyburn’s deep love of history and geography and his dedication to Milton as a student, parent and trustee.