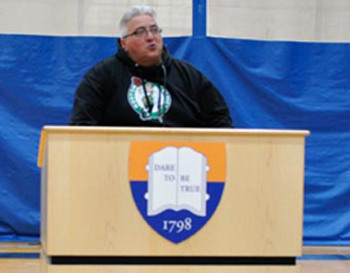 Over more than three decades as a sports journalist, the Boston Herald’s Danny Ventura has covered high school matches, college championships and history-making professional sports events, and athletes at every level have left lasting impressions on him, he told Milton students.

“It’s not just about the big stars,” said Mr. Ventura, who was invited to speak at this year’s Athletics assembly. “There are just so many millions of stories in sports.”

Mr. Ventura, the Herald’s high school sports editor, enjoys writing about young athletes because of their promise and passion. Realistically, the high-school level will be the end of most athletes’ playing careers, so they are competing for the sake of competition and to build lifelong skills.

“For a lot of pro athletes, it’s a job, and they treat it like work,” he said. “It’s very refreshing to cover sports at the high school level because the vast majority of kids are doing it for the love of the game.”

Student athletes deserve the respect and recognition of their local and regional media, Mr. Ventura said. He reminds himself that although high school sports don’t receive the same mass attention as college and pro sports, the athletes earn their spot in the news.

“Going into something like a gymnastics meet, I always remind myself how hard the athletes have worked to get there,” he said. “It is everything to them in that moment. You’ve got to cover it the same way you’d cover the Super Bowl.”

Mr. Ventura began covering local sports part time for a community newspaper in Dedham, Massachusetts, eventually working his way to a regular beat. He first felt the squeeze of the struggling print journalism business in 1990: On the same day he won a community award for his work, he got a pink slip from his paper. One of his former editors had joined the staff at the Boston Herald, and Mr. Ventura reached out.

His first job at the Herald was compiling the sports agate—a daily table of scores for the sports section. “It was humbling, but it was also a way to get my foot in the door,” he said. He had learned early in his journalism career that success was borne of enthusiasm; when editors asked him to do more and more, he always said yes. Now the job is more than just writing: it requires multimedia reporting and a strong social media presence, and reporters still struggle in a rapidly changing industry.

Reporting on high school sports allows news outlets to cover more than the “big four” sports: Football, basketball, hockey and baseball. Mr. Ventura has witnessed the rise in popularity of soccer, lacrosse, wrestling and more among young athletes in Massachusetts, as well as an increase in coverage of girls’ teams—something he said could still improve. The Independent School League has also raised its profile as a competitive league, gaining on prominent, public interscholastic programs, he said. Across all leagues and divisions, some parent behavior at games and matches has become overbearing, and Mr. Ventura credits coaches for keeping athletes focused and civil under pressure.

Mr. Ventura has worked for the Boston Herald for nearly 30 years. In addition to his Sweet 16 football rankings, Mr. Ventura also writes a weekly “Around the Horn” baseball/softball notebook, the “In the Paint” basketball notebook and a “No Holds Barred” wrestling column. His “High School Insider” blog was the first of its kind in Massachusetts. He has been honored by the Massachusetts High School Football Coaches Association as well as the Massachusetts Basketball Coaches Association. A winner of the prestigious Fred Ebbett Award of Distinction by the MBCA in 2004 as well as the David C. Weidner Media Award from the Agganis Foundation in 2007, Ventura was inducted into the state Wrestling Hall of Fame in 2011.