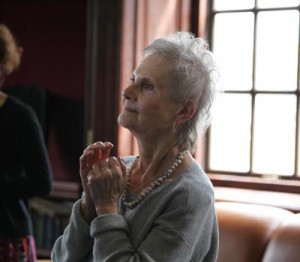 The last thing Malcha Gutmann said to her children was, “I will be back soon. Rita, promise me you will take care of the baby.” The baby, Sylvia Ruth Gutmann, shared the story of her life as one of the Hidden Children of the Holocaust with Milton students this week.

“Hitler wanted me to die,” Sylvia said during an assembly sponsored by the Jewish Student Union. “But Mama wanted me to live. And live I do. And every time I have the opportunity to talk, I have the honor of talking about my parents. I save their lives, too.”

Born in Antwerp, Belgium, to German-Jewish parents, Malcha and Nathan Gutmann, Sylvia has no memory of her early years spent fleeing the expanding Nazi regime. Her family were already refugees at the time of her birth, and she spent seven years on the run. She was just a toddler when French Vichy officers rounded up Malcha, Sylvia, and Sylvia’s sisters, Rita and Suzie. They were interred at Camp de Rivesaltes in the south of France—Nathan, who was battling an illness, would be captured later. One morning, the camp’s prisoners were summoned for a roll call; Malcha told her girls to return to the children’s barracks—she had been tipped off that the prisoners would be transported to Auschwitz that morning. The girls survived, escaping with the aid of a young woman working for a clandestine rescue organization. Malcha was killed in the gas chamber at Auschwitz four days later. Months later, Nathan Gutmann met the same fate.

When she was 7, Sylvia and her sisters were put on a boat to the United States, where they settled in New York City. Rita and Sylvia lived with their mother’s uncle, whose wife resented her new charges and was cruel to Sylvia. When Sylvia tried to explain her story to her new American classmates, a teacher silenced her, calling her a liar.

“I grew up wanting to belong, wanting to be loved. I had no real identity, so I became the person I thought people wanted me to be, but I was filled with shame,” Sylvia said. She learned about her early life and her parents through Rita, who became a surrogate mother. When Rita died in 1993, Sylvia contemplated suicide. “Rita told me who I was. She gave me my childhood,” she said of her sister’s stories.

Knowing she needed help, Sylvia contacted the United Jewish Appeal (UJA) Federation, where she was connected with a psychiatrist, who told her about the Hidden Children, the small population of young European Jews who survived the Holocaust. She started to feel more comfortable talking about the trauma of her early life, and ultimately wrote a book, A Life Rebuilt: The Remarkable Transformation of a War Orphan.

“I was 55 years old. That was my liberation,” Sylvia said of finally receiving counseling. She has traveled to Europe to piece together what she can of her family history, and has shared her story with students internationally. She encouraged Milton students to live purposeful lives, and to carry on the story of the Holocaust so that it never happens again.

“It doesn’t matter the color of your skin, or how you pray, or whom you pray to,” she told students. “But be of service. Give back. Be grateful. Be grateful that you are hearing from the last of the survivors. Who will tell the story? You will.

“I’m depending on you. I’m making you responsible,” Sylvia added. “So take me. Take my story. Live good lives, no matter who you are, or how you are. You have your whole life ahead of you. What will you do with your one and precious life?”