I Hate Hamlet, But Only This Weekend 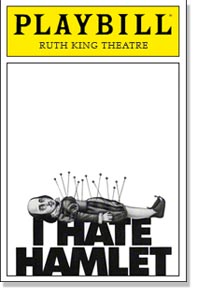 “When sorrows come, they come not single spies. But in battalions!”  The winter storms may have temporarily stunted our good cheer, but Darlene Anastas and her cast of six offer a shield to fend off thy sorrows. I Hate Hamlet, a light-hearted comedy by Paul Rudnick, opens this weekend in Ruth King Theatre.

John Glasfeld (I) plays the role of John Barrymore, a ghost who returns to teach Andrew Rally, played by Chris Wilbur (III), how to perform Hamlet.  Girlfriend Deirdre, played by Grace Stanfield (II), defends her honor while the psychic real estate agent Felicia Dantine, played by Joy Lee (III), gives advice on love and life. Lillian Troy—Dorsey Glew (IV)—is Andrew’s acting agent who is very much in favor of his playing Hamlet. On the other hand, Gary Lefkowitz—Nick Gistis (IV)—arrives to bring Andrew back to Los Angeles to star in a new TV series. Conflict abounds. Will Andrew play Hamlet? Will Barrymore ever stop drinking? Will anyone find romance? Come to King Theatre this weekend and find out.

Tickets can be purchased at the door or during lunch in Forbes Dining Hall. Performances begin at 7:30 p.m. on Thursday, February 19 and Friday, February 20, and at 7 p.m. on Saturday, February 21.