On October 25, Josie Wilson (I) broke the five-year girls’ course record in cross country with a time of 19:36 at Cunningham Park, beating the old record by seven seconds. This is Josie’s first season with the team; she previously spent her fall season on the varsity soccer fields. The weather challenged Josie and her teammates on Saturday; occasional downpours soaked most of the course in several inches of water. Milton’s newest record holder talks running and strategy:

Q: Why did you decide to make this your first season running cross country?

JW: I’ve always liked to run, and I have run distance track at Milton since freshman year. Last year my times in track improved significantly. This was the first summer in four years that I didn’t spend at sleep-away camp, so I decided to sign up for a running program called Emerging Elites, to stay in shape. After a summer of training, I realized that I was probably better at running than I was at soccer. I had played soccer for fourteen years, and I loved being a part of the “Wolfpack,” so it was a difficult decision for me to make. I ultimately decided to join the cross country team because I’d put a lot of time into training, and it seemed like a waste not to do anything with it. I wanted to see how strong a runner I could become.

Q: When did you realize you might have a chance at the course record? Was that your goal coming into the season?

JW: I realized that I had a chance at the School record after the first home meet, when I ran a 20:03. I knew that the school record was 19:43, so I realized the time was within my reach. After that meet, breaking the record became one of my goals.

Q: When during the race did you realize you might break the record?

JW: I knew Saturday was my last shot. I was feeling great, had a good warm up, and was ready to go. I felt really good during the race. I knew my mile splits had to be between 6:14 and 6:18, but when I came to the first mile, I thought my coach called out “6:40” when he actually said 6:14. I tried to keep calm and stick to my race plan. I guess it worked! The one place on the course where I realized that the record was actually within reach was at the beginning of the pavement before turning onto the field. My goal was to be at the pavement before 18:00, leaving me with enough time to finish. When I looked at my watch, it said 17:42, so I knew that if I kept running hard, I was probably going to break the record.

Q: Did the weather conditions on Saturday change your race strategy?

JW: The weather conditions were interesting, to say the least. About 15 minutes before the race, it started pouring. I think it was the hardest rain I’ve ever been in! I tried to stay dry by warming up under the trees, but I inevitably got soaked. I kept my race strategy the same, though. I was going to go out controlled, pay attention to my form, and try to focus the whole time. When we lined up at the starting line, the rain stopped, but the course was drenched. A good portion of the course is in the woods, and the trails had three or four inches of water on them. I couldn’t see my shoes for the majority of the race because they were underwater. Looking back, the weather probably helped me. Every circumstance battled against my breaking the record: I was soaked, the trails were underwater, and the course was slippery. In that way, the weather took the pressure off and allowed me to run my race.

Q: The record you broke was five years old. How long do you think it will be before a runner breaks it again?

JW: I’m not sure how long it will stand.. I would like it to stand for a little while; it’s cool to say that I hold the School record! But I would also like it to be broken, so that another person gets to experience what I felt on Saturday. 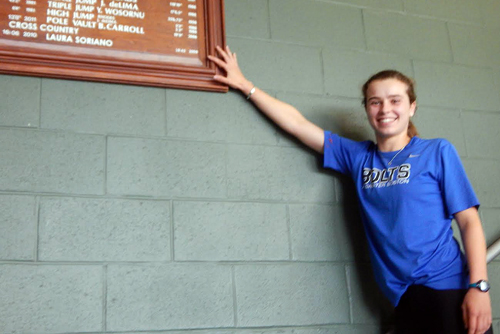