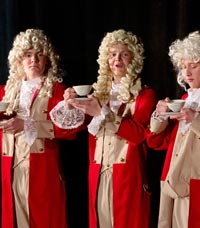 This spring’s 1212 play brought another round ofSaturday Night Live comedy to campus. Wicked Sketchy is an original production made up of 18 sketches, written and performed by students. Last spring’s Wicked Sketchy production was so successful that Peter Parisi, performing arts department chair, thought it made sense to do it again. This time, Jake Daniels (I), Mack Makishima (II), Rick Dionne (I), Alex Gistis (II) and Minh-Anh Day (I) took on lead writing and directorial roles in this collaborative project. The 28-student cast pitched ideas to each other and wrote draft skits in small groups, eventually choosing the final 18, which each student had a hand in editing.