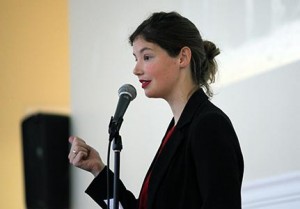 Sixty-five million people around the world are displaced from their homes and on the move—the largest number of migrants in human history, humanitarian Cate Brown told students. They are refugees, asylum seekers, and internally displaced or stateless people who have uprooted their lives or been forced from home because of political oppression, violence, resource scarcity, and economic struggle, among other reasons.

The statistics around migration are overwhelming, Ms. Brown explained, and reflect the enormity of a crisis affecting every continent on earth, but they can distract from the human impact of migration. The average displacement time for a migrant is 17 years, and more than half of the world’s migrants are children.

“It’s so important to remember that there are humans behind the numbers and the labels we use,” said Ms. Brown, who visited Milton as this year’s Amnesty International and Mediterranean Cultural Club speaker.

Displacement and migration are incredibly complex issues, requiring political, humanitarian, and environmental solutions tailored to the different areas and populations in need. Indigenous people in Bolivia, forced from home due to dwindling natural resources, have much different needs than Syrian citizens who have fled the violence of civil war, for example.

Ms. Brown shared a clip from the New York Times Op-Doc “4.1 Miles,” depicting the harrowing rescue of refugees attempting to cross the 4.1-mile strait from Turkey to the Greek island of Lesbos—a popular point of entry for Middle Eastern refugees attempting to resettle in Europe. The documentary shows the devastation and risk of the crossing, as a boat crew throws ropes to swimmers struggling in the waves, in contrast with images of daily life on the nearby Greek shore.

“I want everyone to take a second and think about how it would really feel to want to leave home that badly, and for families to take those risks together,” Ms. Brown said. “There are one million people who have made that journey across those 4.1 miles. We have to think about the conflict that they are fleeing as well as the impact on the communities where they are showing up.”

Ms. Brown is a graduate student in human rights and humanitarian policy at Columbia University. Previously, she worked with Human Rights Watch, Mercy Corps, and Where There Be Dragons, a cross-cultural education company. She has worked on humanitarian efforts in India, Cambodia, and Jordan.