Matt Trammell ’09 Combines Love of Music and Writing, For The New Yorker 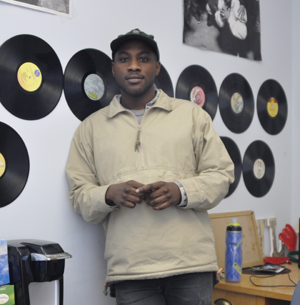 When you find something you love, you’ll never be bored, Matt Trammell, Milton Class of 2009 told students during their Craft of Non-fiction class. Matt is a music writer and the nightlife editor for The New Yorker. His work includes following both rising and well-known artists through New York City’s concert scene; reviewing new albums; connecting good music to the culture that it reflects; and sharing that perspective with the world.

“Being jaded is a choice,” he told students. “If you’re truly interested in something, then you will always find a way to stay interested in it. The older you get, the more you tend to hold on to the music of your past. You think music is not as good as it used to be. But music you like is being created all the time, and you’ll find it if you’re invested in finding it.”

During a recent visit to campus, coordinated by English department chair Tarim Chung, Matt attended classes and met with student groups and publication leaders. During Eve Goldenberg’s Craft of Non-fiction class, which includes writing memoirs, Matt addressed how memoir-writing takes careful observation and analysis, and that insightful writing stretches beyond demographic labels, such as race, gender and geography.

“There is no single trope that you fit into,” he said. “Every person is as original as they allow themselves to be. To be able to look at something that’s happened in your life, and to draw meaning from it that hasn’t already been assigned to you, is work that you’re going to have to do, regardless of whether you’re writing a memoir. It’s going to help you find out what you want and what you have to contribute.”

Matt, a Brooklyn native, took journalism classes and wrote for the newspaper in junior high school before arriving at Milton, where he said the teachers in the English department raised his ability to communicate. This was the first place he learned that he could write well, he says.

“The power of developing an original thought, creating a thesis and having the evidence to support it, is so valuable and applicable to whatever you want to do,” Matt said. “It’s like having a superpower in the real world. That ability to think critically, to analyze well, is becoming increasingly rare, and it’s more valuable every day. It starts in these English classes, with these teachers who are so good.”

Growing up, Matt was surrounded by music. His father liked classic country and soul, while his mother stayed current with everything new. Though Matt isn’t a musician, he became interested in music as a cultural marker and how the art form reflects society.

Understanding music in the context of its time and cultural significance fascinates Matt. In a recent piece, he examined “New Day,” a song from Jay-Z and Kanye West’s album “Watch The Throne.” The song, which came out before the rappers became fathers, is about giving advice to their future sons. Hearing it through the lens of their high-profile relationships and celebrity children now changes its meaning, Matt says.

“Music is a timestamp. It’s not like anything else,” he says. “Visual art, theater, all these other art forms have some level of fiction within them, or some sort of distance. If you’re a musician, it’s just you, and what’s going on in your life at that moment. It’s such a marker for time and society.”

Matt graduated from New York University, where he took a class taught by Robert Christgau, a rock music critic and editor for The Village Voice. Matt realized that he could marry his lifelong love of music and his skill for writing into a career. He asked Christgau if he knew of any available internships, and ended up with a freelance job writing album reviews for Rolling Stone. After NYU, Matt worked at FADER magazine, prior to his role at The New Yorker.