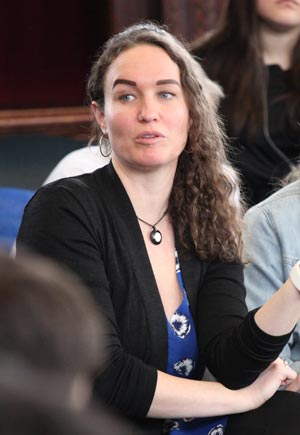 Born into “the most hated family in America,” Megan Phelps-Roper grew up believing that she was working to save people from eternal damnation with her church’s extremist messages. By the age of 5, she was on the picket lines with the Westboro Baptist Church, protesting everything from plays to military funerals with profane signs and slogans.

Ms. Phelps-Roper, who left the Westboro Baptist Church—and most of her family—in 2012, told Milton students that meeting people on social media who thoughtfully challenged her church’s narrow and contradictory interpretation of the Bible helped her walk away from hate. Ms. Phelps-Roper visited Milton as this year’s Class of 1952 Religious Understanding Speaker.

“I began to develop an undeniable understanding that we’re human and fallible. We are not divine,” Ms. Phelps-Roper said. “That was the beginning of the end for me. Through these ongoing conversations on Twitter, I was learning a new story about people I had thought were my adversaries. In spite of their abhorrence of my beliefs, they befriended me.”

The Westboro Baptist Church, founded in 1955 by Ms. Phelps-Roper’s grandfather, Fred Phelps, is a hate group, according to the Southern Poverty Law Center. The church earned notoriety for its virulently anti-LGBTQ and anti-Semitic positions and demonstrations—often at funerals and cultural events—where members, including young children, hold offensive signs cheering God’s “vengeance” upon America for its sins.

Ms. Phelps-Roper and her siblings and cousins were not isolated from the world—they went to public schools and consumed pop culture—but they were conditioned to believe that they were protected by God, while those who didn’t repent in the Westboro Baptist Church were doomed to hell. As she grew older, she established the church’s social media presence. Some of the people Ms. Phelps-Roper initially argued with became her close friends; she even met her husband through Twitter—their exchanges began as arguments while she was still a member of the church.

“It seemed like a perfect way to reach people. It was so easy to find targets and attack them,” she said. “What I wasn’t prepared for was kindness.”

Ms. Phelps-Roper attacked prominent Jewish Twitter users, including writer and activist David Abitbol, with whom she eventually developed a friendship. Eventually Mr. Abitbol asked a question that highlighted her church’s hypocrisy: If the members believed that gay people should be condemned to death for violating God’s laws, how could they accept a member having a child without being married, another biblical sin? Her oldest brother was born out of wedlock.

Ms. Phelps-Roper spoke with compassion about the family members who remain in the Westboro Baptist Church, but has no contact with them—including several siblings and her parents. Those who remain are compelled by “the unbelievable staying power of bad ideas,” and fear of the rampant sin they see in the world, though, she noted, they truly believe they are doing the right thing.

After leaving the church with her sister, Ms. Phelps-Roper intended to withdraw from public life entirely, but changed her mind after Mr. Abitbol introduced her to the Jewish concept of tikkun olam, the responsibility of every person for the welfare of society. “To me, that idea was hopeful and liberating.”

She continues to receive criticism, and even threats, from people who were deeply hurt by the Westboro Baptist Church’s activities. In response, she promises to go forward to bring positivity into the world. She has publicly apologized for her actions while she was a member of the church.

Ms. Phelps-Roper, who doesn’t belong to any religious community, is now a speaker and social media activist. She encourages people to understand the humanity and complexity within those who argue with them online, and to not resort to personal attacks if someone is willing to engage in conversation.

Ms. Phelps-Roper’s 2017 TED Talk was one of the year’s 10 most popular. Her memoir, This Above All, is coming soon; it will be adapted into a film written by Nick Hornby and produced by Reese Witherspoon. She has appeared on the television shows “I Love You, America” and “The Story of Us.” As a keynote speaker and educator, she engages with schools, faith groups, law enforcement, and anti-extremism organizations on strengthening human bonds through better public discourse. She has been featured by The New Yorker, The Guardian, VICE, The Globe and Mail, NPR, and other international organizations.