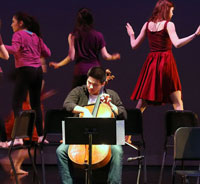 When Andrew Byun (II) plays his cello, he immerses himself in the instrument and the emotions in the music. It is not surprising that one of his favorite composers is Sergei Rachmaninoff, who wrote challenging, emotive and melodic pieces. Andrew can also easily switch gears and entertain his peers with “Viva la Vida” by Coldplay during a morning assembly.

“Music is one thing I truly enjoy doing. No one has to persuade me to practice. It’s always been a part of my life,” says Andrew, who practices up to three hours a day. He grew up in Canada and Korea, member of an artistic and musical family. His mother is a painter, his oldest sister is an opera singer in Korea, and his other sister studies piano at the New England Conservatory.

Andrew recently appeared onstage at Jordan Hall in Boston for the taping of the 300th episode of “From the Top”—an NPR program “dedicated to celebrating the stories, talents, and character of classically-trained young musicians.” He played the third movement, Andante, from Cello Sonata in G minor, Op. 19, by Rachmaninoff and the third movement, Danza Finale, from Suite for Solo Cello by Gaspar Cassadó. The latter piece Andrew played onstage during last year’s Dance Concert, at the center of the choreography performed around him.

Listen to Andrew’s “From the Top” performances.

Playing at Jordan Hall was Andrew’s first time performing in front of a large crowd—nearly 1,000 people. Although he was nervous, he says it was an exciting experience. Interviewed onstage afterward, Andrew told the crowd that his most powerful musical experience is working as a teaching fellow at From The Top’s Center for the Development of Arts Leaders. Through this program he works with children at Chittick Elementary School in Dorchester.

“I work with a little boy named Cameron,” he told the audience. “When I first started teaching him, he was very introverted and shy. When I would tell him to do something, he would just do it; he wouldn’t say anything. But now he is much more extroverted and we joke around a lot. Now when I tell him to do something, he always asks me why he should do it! Our relationship has become much deeper and more meaningful. Watching Cameron improve, and seeing how our relationship improves through music, has been very powerful for me.”

At Milton, Andrew plays in both the orchestra and Chamber Orchestra. He is also assistant principal cellist of the Youth Philharmonic Orchestra at the New England Conservatory Preparatory School. He has been invited to play at Carnegie Hall in November 2015.