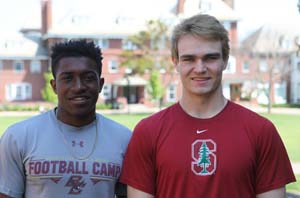 Milton seniors Domenic Cozier and Nat Deacon each earned one of the top awards in high school football on May 15. Both were recognized as outstanding Scholar-Athletes by the Jack Grinold Eastern Massachusetts Chapter of the National Football Foundation and Hall of Fame.

“Coach Mac nominating us is a huge honor,” Nat said, referring to Coach Kevin MacDonald. “The night of the awards, there was a banquet at the Boston Marriott, and we heard from people who have been involved with high school sports in Massachusetts for a long time, which was incredible.” Domenic added, “This award is such an honor, because it recognizes not only your athleticism, but also your academic abilities and who you are as a person.”

Nat and Domenic—both captains this year—exemplify the term “scholar-athlete,” says Coach MacDonald: “Both of them are outstanding leaders.” Each player had his own challenges in the 2015 season: Domenic sustained a season-ending injury to his elbow in the first half of the first game. With the team’s third captain, James Fadule (I), also out with an injury, Nat stepped up, leading the team in pre-practice rituals, calisthenics and stretching, as well as post-practice pep talks, says Coach MacDonald. Nat credits the team for rising to the occasion when two of their leaders were injured. Both seniors said it has been an honor to play for Coach Mac, who takes the time to know each player personally and holds them to high standards as athletes and citizens.

“Domenic is arguably the most productive offensive player I’ve coached in 39 years of high school football,” says Coach MacDonald, who nominated the running back based on his spectacular record as a junior, when he rushed for 1,445 yards in eight games, averaging an extraordinary 16 yards per carry. Nat, a fullback and linebacker, impressed his team and his coach with his tenacity and durability during their 6–2 season in 2015. “Nat is a gentleman off the field and a relentless competitor on the field,” describes Coach MacDonald.

Domenic and Nat join 31 other Eastern Massachusetts players from private and public schools receiving this year’s honor. Nat will attend Bowdoin College, and Domenic will attend College of the Holy Cross this fall.