Milton Gets Wicked Sketchy This Weekend 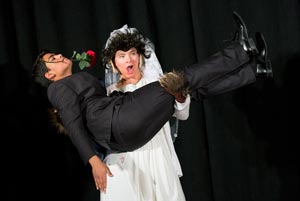 It’s turning into an annual spring tradition as the 1212 play brings another taste of Saturday Night Live comedy to campus. Wicked Sketchy is an original production made up of sketches, written and performed by students. For this third production, Wicked Sketchy veterans Mack Makishima (I), Alex Gistis (I) and Melody Tan (I) took on lead writing and directorial roles in this collaborative project. The 12-student cast pitched ideas to each other and wrote draft skits in small groups, eventually choosing the final ones, which each student had a hand in editing. Director and performing arts faculty member Peter Parisi says sketch topics range from pirates to family relationships, Greek mythology to dating, and the production includes two musical numbers.