Milton in the World: Patrick Radden Keefe ’94 Discusses Say Nothing and Writing 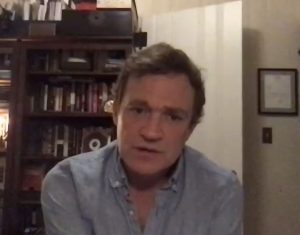 Award-winning writer and investigative journalist Patrick Radden Keefe ’94 spoke with students and alumni about his work, particularly his New York Times bestseller Say Nothing: A True Story of Murder and Memory in Northern Ireland. His talk was part of the Milton in the World webinar series.

Radden Keefe said he knew when he was a Milton student that he wanted to be a writer, but it took many years of rejection letters before he began writing professionally. Today, he is a staff writer at The New Yorker, writing long-form pieces that dive deep into a range of subjects, “from the hunt for the drug lord Chapo Guzman to the tragic personal history of the mass shooter Amy Bishop and the role that the Sackler family and their company Purdue Pharma played in sparking the opioid crisis.”

He said he looks for topics that have a “strong narrative spine. I want it to be a story about people, often people in conflict. It’s through that lens that I approach the bigger issues.”

Obituaries are often a source for his ideas, said Radden Keefe. The concept for Say Nothing came after he read an obituary on Dolours Price, one of the key figures in the book, which chronicles life in Northern Ireland during the Troubles.

English faculty member Lisa Baker moderated questions from the audience, many of which focused on his writing process. For Say Nothing, he spent four years reporting on the story, traveling among Northern Ireland, England, Ireland, and the United States, sifting through archives and interviewing more than 100 people.

At the beginning of his writing career, “I was really inefficient because I love the research,” said Radden Keefe.  “I could do research forever. But you need to come back and tell the story. It’s hard, but I think I’ve gotten better at it over the years.”

He also spoke about “Wind of Change,” his new eight-part podcast series that investigates the strange convergence of espionage and pop music during the Cold War.

Radden Keefe grew up in Dorchester, Massachusetts, and went to college at Columbia. He received masters degrees from Cambridge University and the London School of Economics, and a J.D. from Yale Law School. In addition to The New Yorker, his work has appeared in The New York Review of Books, The New York Times Magazine, and other publications. He is the recipient of a Guggenheim fellowship, and fellowships from the Rockefeller Foundation, the New America Foundation, the Woodrow Wilson International Center for Scholars, and the Cullman Center for Scholars and Writers at the New York Public Library.