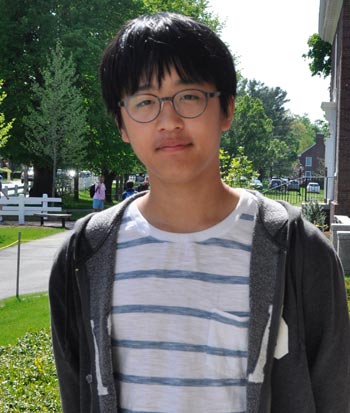 Lawrence qualified for the USAJMO by scoring high in a series of math competitions. He then sat for the nine-hour USAJMO over a two-day period, where he competed against fewer than 250 other students from the United States and Canada. The test consisted of six questions, for which Lawrence had to present essay-style mathematical arguments, and required him to work in a testing room away from all electronics and outside influences.

“I was really nervous, but at the same time, very excited to compete. It was the longest test I’ve ever taken,” Lawrence said. “There is a lot of critical thinking involved in the problems. On the first day, I solved the questions I knew how to solve and then went to work on the others. The next day, I worked on explaining my answers.”

When he was younger, Lawrence would borrow his older sister’s math homework and solve the problems on his own. Math competitions help him challenge himself and feel empowered to take risks, he said.

Milton’s Math Club is a great opportunity to explore new topics in math outside a classroom setting, Lawrence said. Recently, the club has learned about game theory and paradoxes. “I would encourage people to check it out. Some people think of math as just a school subject they have to get through, but it’s much more interesting than that.”

“Lawrence is at the level where he can think about math creatively,” said emily bargar, who coaches him on the math team. “He thinks like a mathematician.”

A handful of students scoring at the top levels of the Olympiad qualify for a summer math camp, from which an even smaller selection is chosen to represent the United States at the world level. Although he did not qualify this year, Lawrence intends to try again. He is applying to summer math programs this year, he said.

Heather Sugrue, chair of Milton’s math department and Lawrence’s teacher, described Lawrence as a “fantastic student who is engaged in class and eager to dive into explorations.”

“His classmates know that he is a great resource, and they enjoy working with him. He is an unassuming young man who will happily work with anyone in a small group setting, and helps move conversations forward with good ideas,” Heather said. “It is very exciting to us in the department to have a Class IV student with this type of talent and interest. We look forward to finding more ways to support him and help his interests grow.”

Milton Academy was previously represented at the International Math Olympiad by Paul Valiant ’01, who competed at the world level three times.