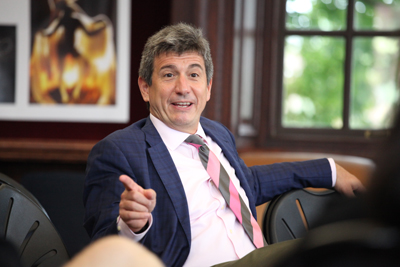 As China grows in economic power, an understanding of history provides context for the cultural, environmental and trade shifts ahead for the world, said Michael A. Szonyi, this year’s Hong Kong Distinguished Lecturer.

Professor Szonyi is the director of the Fairbank Center for Chinese Studies and professor of Chinese studies at Harvard University. During his visit to Milton, he described the global reach of the Belt and Road Initiative (BRI), China’s massive trade plan, as the “largest infrastructure project in human history, by a factor of many.” Current growth rates put China on track to surpass the United States in economic power within the next few decades, Professor Szonyi told students.

“You are going to be, in your lives and your careers, facing a world where China is dominant in the region, and perhaps dominant around the world, so whether its signature foreign policy initiative succeeds or fails is going to profoundly shape the world that you all live in,” he said.

According to Chinese proponents, expanding trade under the BRI could potentially benefit two-thirds of the world’s population. Critics of the BRI view it as a “plot for China to become globally dominant.” The reality lies somewhere in the middle, Professor Szonyi said. Expansion of infrastructure could bring wealth and resources to underserved regions, but could also come with environmental threats; and Chinese investment in other countries on behalf of the BRI could amount to a kind of economic colonialism.

Professor Szonyi pointed to narratives used by Xi Jinping, president of the People’s Republic of China, to promote the BRI. The leader has framed the trade policy as in line with the explorations of Zheng He, which President Xi describes as benevolent, when in fact, the 15th-century voyages were a demonstration of China’s military might. Even naming the BRI in reference to the historic Silk Road is something of a misnomer: Early trade routes presented opportunities for western nomads to pillage silk and other goods from Asian nations, rather than to engage in fair trade.

“Thinking historically about the Belt and Road initiative can give us perspective and help us understand it better,” Professor Szonyi said. “One of the cool things about history, one of the reasons to study history, is that it allows you to see how history is being used and misused in the present to serve political ends.”

Professor Szonyi is the Frank Wen-Hsiung Wu Memorial Professor of Chinese History at Harvard, in addition to leading the Fairbank Center. He has written, translated or edited seven books, including The Art of Being Governed: Everyday Politics in Late Imperial China (2017); A Companion to Chinese History (2017), and Cold War Island: Quemoy on the Front Line (2008). He is also co-editor, with Jennifer Rudolph, of The China Questions: Critical Insights on a Rising Power (2018). A frequent commentator on Chinese affairs, Professor Szonyi is a fellow of the Public Intellectuals Program of the National Committee on US-China relations. He received his bachelor’s degree from the University of Toronto and his doctorate from Oxford University, where he was a Rhodes Scholar. He has also studied at National Taiwan University and Xiamen University. Professor Szonyi previously taught at McGill University and the University of Toronto.

The Hong Kong Distinguished Lecture Series brings to campus speakers who help raise our awareness about issues of concern in Asia, and help us better understand the cultures, art and history of Asian countries. Former Trustee Helen Lin ’81, along with more than 100 Milton graduates living in Hong Kong, established the series in 1998.