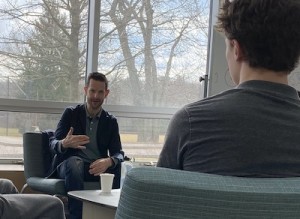 The question was a daunting one: Could there be a way to repair a congenital defect in a child’s heart that would grow with the patient without requiring additional invasive surgeries?

To answer it, Dr. Jeff Karp, this year’s science assembly speaker, and his lab team broke down the problem—the repair would have to be flexible and adhesive, to accommodate the movement and growth of a beating heart and to stay put despite the blood flow. So they looked to nature, investigating how other living things have evolved over time to thrive in similar environments.

“Everything natural that exists today is here because it solved seemingly insurmountable problems,” Karp told Milton students in March. Karp is a professor of medicine at Brigham and Women’s Hospital, Harvard Medical School, and he has more than 100 issued or pending patents.

The sandcastle worm uses its own viscous secretions to stick to surfaces in harsh ocean environments; slugs and snails shield themselves from water with a hydrophobic mucus. When ivy climbs a surface, it finds gaps in the surface and anchors itself in place.

Using those bioinspired starting points, the lab developed a light-cured adhesive for the procedure. After some time, the child’s heart tissue grows over the repair and the material naturally degrades, Karp said. The adhesive has had other applications as well, including as a dental repair for a dog.

In creating solutions, researchers have to break free of traditional approaches, Karp told students. Instead of just tweaking one or two things after a failure, he suggests seeking inspiration from nature and exercising “radical simplicity.” By breaking down a problem to its simplest elements, researchers may find an equally simple solution.

Collaboration is also key, Karp said. To make his various businesses successful, he meets regularly with biotech and medical entrepreneurs, who have given him advice on securing funding, licensing, and navigating the regulatory processes.

“One of the biggest challenges we face is how we approach problems,” Karp told students. “All of us need to break free from repetitive thinking.”

Karp has published more than 125 peer-reviewed papers, and the technologies developed in his lab have led to multiple products currently undergoing clinical development or on the market and for the launch of nine companies that have raised over $400 million in funding. Karp has received over 50 awards and honors. Boston Magazine recently recognized Karp as one of 11 Boston Doctors Making Medical Breakthroughs. His work has been selected by Popular Mechanics as one of the Top 20 New Biotech Breakthroughs that Will Change Medicine.